The Battle of Maloyaroslavets - A Horse, Foot & Guns Refight

The Battle of Maloyaroslavets:

The recent issue of Wargames, Soldiers & Strategy had a scenario in for the Battle of Maloyaroslavets which looked promising.  It consists of Prince Eugene's IV Corps attempting to seize the strategically important crossroads and crossing at Maloyaroslavets as part of the initial retreat of the Grande Armee from Russia.  He was opposed by a Russian Corps led by General Dokhturov, who fought throughout the Napoleonic Wars. 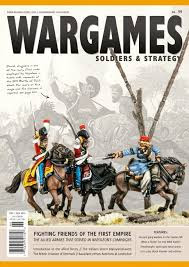 I have wanted to have a go at this one for abour 30 years, ever since I saw an article on it in a magazine (Military Modelling, perhaps? If there are any grognards who remember the issue, please let me know!) as a child. 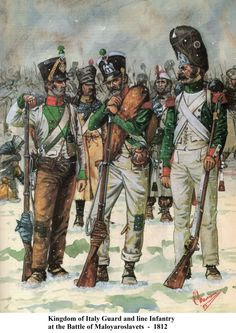 The scenario is written for Over the Hills with suggestions for conversion to Grand Armee and Black Powder.  It is bath-tubbed, so one real-life brigade is represented by a battalion.  I prefer to use rules specifically designed for individual units to be brigades in these circumstances, so I used Phil Barker's Horse, Foot and Guns.

There was no scale on the otherwise nice-looking map (a perennial annoyance in magazine scenarios!) so I have estimated the size of the battlefield, but I  may have been a bit off (possibly a little too big).

*assigned as per scenario; in HFG, all French Napoleonic Infantry is typically counted as 'Bayonets' rather than 'Light Infantry', despite formal designations.

Both the Imperial French and the Russians arrive piecemeal.  The terrain was very difficult off-roads, which is all counted as 'Slow Going' (or rough/broken ground in other rules).  The stream has high banks, so it is potentially fordable by infantry (HFG has specific rules for this, as does the magazine scenario) but not other arms.

There is one thing I don't understand about the WSS article as written.  It looks like the infantry and perhaps cavalry have been bath-tubbed, but not the artillery. This leads to each side having roughly a battery of artillery per brigade-equivalent of troops.  This seems much too high, even for the Russians.  So I assumed that each French battery was 6-8 guns, each Russian battery was 12 guns, and then converted them into an appropriate number of artillery bases for HFG.

As part of the scenario, I slightly changed the break point rules so that an Army broke once a quarter of the bases that had entered the table by that time had been eliminated.  This was to stop a too quick break for either Army.


Game Notes:
A good scenario led to an excellent game.  Since it is a while since I have played Horse, Foot and Guns, there were a few disjointed moments and my tactics were pretty unhandy (for both sides).  I am a fan of the simple die-roll PIP mechanic of the DBx family of games, although I know that it has its opponents.  It does give a tense and interesting game though and works very well solo, being the "distilled essence" of many of the other systems which try to limit command and control.   Likewise, the combat system is quite stripped down compared to many other systems, although how much this matters is a matter of taste: it does contain the distilled essence of others, except for its emphasis on shock rather than attrition.  This seems a much more debatable point than in the ancient and medieval period, in which shock action clearly seems more important.  However, I mainly play Polemos which fundamentally shares the same outlook.  Rallying routed troops is possible but difficult.  Anyway, the plan is to get a few more games played and then do a fuller review.  Like all DBx games, it really does rattle along and it is also quite a complete set: there weren't too many moments of doubt about how to resolve any given situation.

Figures and buildings by Baccus 6mm (I clearly don't have enough Russian artillery so the Austrians were helping out!  I need to remedy this...).
Posted by JWH at 05:29