The citizens of Shrewsbury sent a deputation to Prince Maurice, thanking him for his loyal devotion to King and Country and keeping the city safe from rebels and traitors.
The Oxford garrison sent a note to the King, informing him of a small plot of traitors and malcontents to hand over the city to Parliament which had been discovered and foiled.

Rupert moved to Wells, incorporating Hopton who had been training his Foot, after taking Malmesbury.  Bedford took Exeter as he continued his slow march through Devon.  Prince Maurice moved south from Shrewsbury and took Hereford & Ross-on-Wye; Vasey replaced him in charge of the garrison of Shrewsbury.

Baillie takes the Cheviots and Leslie pushed on to Naworth.  Newcastle remained static in the city of the same name, training his troops.  Fairfax took advantage of the situation to move on York and besiege it.  King Charles left his central position and moved east to Louth, where his army destroyed a small force of Parliamentary foot there.

Browne took a detachment from Essex' army in London to besiege Oxford. 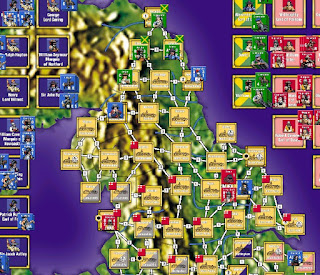 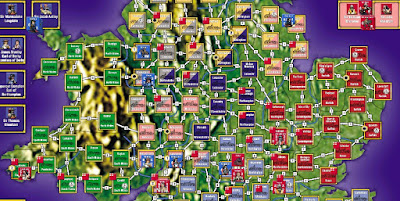 Game Notes:
There is either a terrible glitch or piece of sublime brilliance in the design of The King's War, depending upon the designer's intention.   The Covenanters do not quite get enough supply points to attack with all their army at one time!  They can march together and not fight a battle but it takes 7 supply points to move a force of over 10,000 men into battle and the Covenanters only have six...since the Marquess of Newcastle has a force of around that size, he effectively blocks the Covenanters' direct advance; hence the moves towards Carlisle and Hexham to outflank Newcastle.
One thing about taking a lengthy campaign break is that it is impossible to remember all the details of thought, thus the movement of King Charles to destroy the isolated force of Parliamentary Foot lying at Louth on the East Coast.  This was to have the most interesting consequences in the next month...
Fairfax's move on York has more or less defined the Royalist strategy for the moment, in that the King must move his army North to relieve that city.  This gives the strategic initiative to Essex and Manchester.  What should they do with this freedom?  King Charles, Prince Rupert and the city of Oxford all seem like possible targets, with the probability that two, but not three, of these targets may be achievable.