Battle of Flodden (II) - Polemos Wars of the Counter-Reformation refight 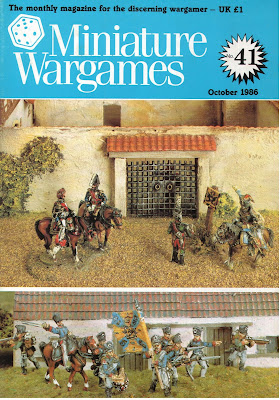 For my second go at Flodden (the first refight is here), then I decided to give another set of rules a go: this time Polemos Wars of the Counter-Reformation, available for free on Polemos author David Heading's blog, Polemarch.  They are very much in skeleton draft format at the moment (more of which later) but most experienced gamers should be able to get them to work, more or less.

The WotCR set uses many of the basic assumptions of DBR and DB in terms of troop types.  For this battle, I used the following order of battle:
Scots Common Army: 12 x Pk, 1 x Bows, 1 x Art, 3 x Militia (n.b. I accidentally transmogrified this during the game into 6 x Tribal Foot, which had some 'interesting' consequences); depending upon how you feel, 3 x Tribal Foot might have been okay.
The pike were organized into 3 'battalia', as were the militia/tribal foot.
English Tudor  (Wars of the Roses) Army: 6 x Bills, 1 x Light Horse, 4 x Bows, 3 x Art
I chinned off the baggage requirement since this seems not to have been a feature of the battle, but one could/should use 4 baggage elements behind each army.
The terrain notes are as in the first battle, more or less. Troops move at half-speed through the marshy ground, and take one turn to cross the stream.
The Set-Up:


Game Notes: As a relatively experienced player of Polemos rules, in particular the Polemos: ECW and Polemos: SPQR sets by the same author, these rules had many familiar concepts in them so I could get a very decent game out of them.  Again, in many ways it followed the events of the historical battle, which I suppose argues that the rules (and the scenario) aren't all bad! Anway, I will divide my comments into the good, the interesting and the confusing:

The factors generally seemed sensible and are fewer in number than in ECW and SPQR.

The rules are streamlined, faster to play and generally easier to understand.

The rules have clarified some things about what happens to supporting units in certain circumstances.

The army morale system is the best and most intuitive of the iterations I have seen through Polemos WSS, ECW and SPQR.  The rallying system is simplified and effective too.

The tempo system is simplified but still very effective but has an interesting quirk, below), as is the command system, which deals with a lot of the criticisms players have had over the years of both the Polemos and DBx family of games.

The 'tempo' is still present as it is through all the Polemos family of rules.  However, it proposes a very low tempo environment (the maximum number of points a side can have would be 5, and this would be vanishingly rare).  Basically each side gets D6 points/turn, and the bid has to come out of that, as well as any activity. So the number of tempo points you play with is low, so very little activity can be done really, and this declines as the battle goes on (you can't order whole wings, only units and individual battalia).

The combat system has become much more reminiscent of DBx, where it is rating + roll + tactical factors, and the ratio of the numbers, not the difference as in previous Polemos games, becomes important.  The calibration looked generally okay, but it makes combat a lot slower than the vicious fighting in SPQR and decisive charges in ECW: troops can pound away not achieving anything very much for a while here.  Okay, they can do it in the other rules as well, but that is an unusual result in those, but common here.  So you need to be able to multiply by 3/2 (or 2/3 to taste) in your head quickly.

There is no turn sequence AFAIK apart from tempo player then non-tempo player.  This actually worked fine and was quite refreshing, but was unclear that this was what was intended.

As in all Polemos-system games, there are times when it is simply a bit unclear as to what outcome moves (recoils and so on) should happen, when many bases are fighting next to each other in different directions.  What happens when bases hit at oblique angles, contact two bases in the flank simultaneously whilst another unit is attacking the front, that kind of thing.  Even flank attacks aren't really defined.  Obviously as a solo player you can always just say "I know one when I see it" but you will inevitably hit marginal cases even playing solo quite quickly.

(* as in this picture above)

I wasn't sure if troops should 'follow-up' recoiling enemies automatically.  The rules give a combat factor for this, but it isn't obvious to me if that factor should be applied if the winner moves forward and renews the combat in the next turn, or it happens automatically.  And in the latter case, which if any supports should go with it?  Since the rules didn't indicate anything (unless I missed them, which is very possible), I decided to not make following up automatic, so if the other side won the tempo in the next turn, it could negate that advantage if it deliberately moved back into combat.

Anyway, overall I was pretty impressed and I am looking forward to giving these another go soon.

Battle of Flodden (I) - The DBA Refight

Miniature Wargames 41 carried a scenario written by terrain-maestro Ian Weekley about the Battle of Flodden, in which a large Scottish Army under James was defeated by an English army as it was returning North towards Scotland.  Usually Ian Weekley tied his articles in to some element of terrain making, but not this time.  He had however visit the battlefield, which inspired the article.  I too have visited it, and somewhat later, it has inspired me to give it a go too...

This battle marked both the end and beginning of an era: the end of an era, as Scottish pikemen with their King at their head attacked the English army made up of bill and bow, with the nobility dismounting and fighting amongst them; but also the beginning of an era, as artillery played its part on the battlefield, particularly on the English side.
For this refight, I used armies based upon the relevant DBA lists (which do extend just far enough to cover this battle):
Scots Common Army: 12 x Pk (including the general's element), 1 x 3Bw, 3 x 5Hd, 1 x LH
The army list recommends Artillery rather than Light Horse.  Artillery was definitely present on the Scots' side, but appeared to have been entirely ineffective, so I chose the non-list LH element for the Borderers, who definitely were present.  But one alternative would be to lose one of the other elements and use an artillery element instead.  If this is chosen, consider giving it a -1 modifier to reflect its inadequacy.
English Tudor  (Wars of the Roses) Army: 6 x 4Bd, 1 x LH, 4 x 4Lb, 2 x Art
One 4Bd element and one 4Lb element are off-table with Stanley; they can enter the board (paying normal points cost) on the English or either of the flanking edges on any English turn, subject to the player rolling 4-6 on a D6.
The terrain was simple but important.  There was barely a stream between the two hills, but the ground around it was very waterlogged and boggy. This counts as 'Rough Ground' in DBA, and the stream does count as an obstacle to movement. Also the ground is considered to be sloping all the way from the stream to the hills, which have to be imagined as continuously sloping all the way up to the edge of the board - i.e. units may get the 'uphill' bonus even if they are apparently on the flat bit between the marked marshy area and the physical hill models.  Hope that makes sense!

Game Notes: A reasonably faithful recreation of the actual battle, although Stanley stubbornly refused to arrive!  This bad luck was replicated by the Scots' pikemen, who could just never seem to win a crucial throw, or generate enough PIPs when they needed them.  The English artillery was very useful to them, destroying one Pike element but just as importantly, disrupting the Scottish advance and causing it to become prohibitively expensive in PIPs to maintain, so the Scottish attack became disjointed and was defeated in detail.  The terrain rules seemed to model the effects of the ground on the day reasonably well.

On the other hand, with good-quality close combat troops (which 'Blades' and supported 'Pike' are), I do get the feeling sometimes that I am rolling a couple of dice every turn just waiting for a result skewed enough to really make something happen.  It is quite bizarre, but there gets to be a point where there is almost a Nash equilibrium where it isn't obvious that either side can improve its position, so you just have to wait out and let the dice decide.  This is probably where DBA fails slightly against more traditional 'attritional' rules, since even if the two elements involved are in stalemate, they should become less effective relative to all the other units in the game.  On the other hand, not sure how often that would make much of a difference overall.