Just a short update to detail what I have been up to over the last couple of weeks and what I plan to get up to in the next little while.

My ECW campaign is continuing, with more battles (and battle reports) due soon.  I am hoping to reach December 1643 in the next couple of weeks.  At that point, there will be a planned hiatus for a few months as I paint up a Scottish Covenanter army, ready for its march into England.  I think I will have a bit more time for gaming and painting over the next 9 months or so, so I am hoping to pick up some other gaming threads.  Amongst these are returning to some WW2 small-scale actions, the Martinstaadt campaign, revisiting Polemos: Ruse de Guerre and another selection of old magazine scenarios.  I am going to try and do a few more rules reviews too of some older sets, or ones otherwise out of the public eye.

Painting-wise, I am currently finishing off the bits'n'bobs at the bottom of my model box.  This includes making up a War of 1812 United States Army from some spare Napoleonic-era figures (mainly British, but with a few others):


The aim is for all the figures that I can usefully use to be usefully used...there will be a few strips left over, but hardly anything.  Death to Lead Mountains!  Apart from this, there are a few WW2 figures to finish off (some 6mm, some 15mm) but that is pretty much it.  But hopefully enough Scots' Covenanter Infantry will arrive soon to keep me busy, with the intention being to try and finish off those just as Baccus 6mm releases the accompanying Horse, lancers and artillery.

The Earl of Manchester was appointed as Generalissimo of the Eastern Association.  He takes over the Siege of Newark, subordinating Meldrum and Groby to himself.

Royalist sympathizers in Manchester petitioned the King to send forces to free their city from the tyranny of zealots.  Their associates in Chester joined in the call, begging the King to support the towns and cities of the Northwest against zealotry and intolerance and anarchy.

Prince Rupert marched on London via. St. Albans, quickly overrunning the hastily-levied defenders of the city who were quickly killed, captured or dispersed.  The garrison of London quickly closed the gates and manned the walls and called for the help of the Earl of Essex.  He abandoned his siege of Oxford and marched to London via Reading.  Prince Rupert blocked him and the two armies clashed at the Battle of Feltham; although the Royalists perhaps had the better of the fighting in that they inflicted more casualties, Essex succeeded in forcing the Prince to retreat and abandon his attack upon London.
King Charles, after considering but rejecting plans to attack Waller around Hereford-Gloucester or Brereton in the Northwest, decided instead upon a bold attack on the Earl of Manchester's army which was besieging Newark.  Manchester tried to withdraw in front of the King's army, but was brought to battle and defeated at Long Bennington.  The remnants of Manchester's army then fled post-haste into The Fens.
Cavendish continued the Royalist offensives, moving to relieve Chester.  Brereton decided against offering battle, instead retiring towards Blackburn.  Later, Brereton moved into Yorkshire and captured Bolton Castle.
In the Southwest, Bedford moved to Bodmin, and Goring withdrew to St.Austell.
Waller did not move, preferring to train his Foot.  Hopton moved to Oxford to take control of the garrison there.
John Hampden brought the siege of Basing to a successful conclusion. 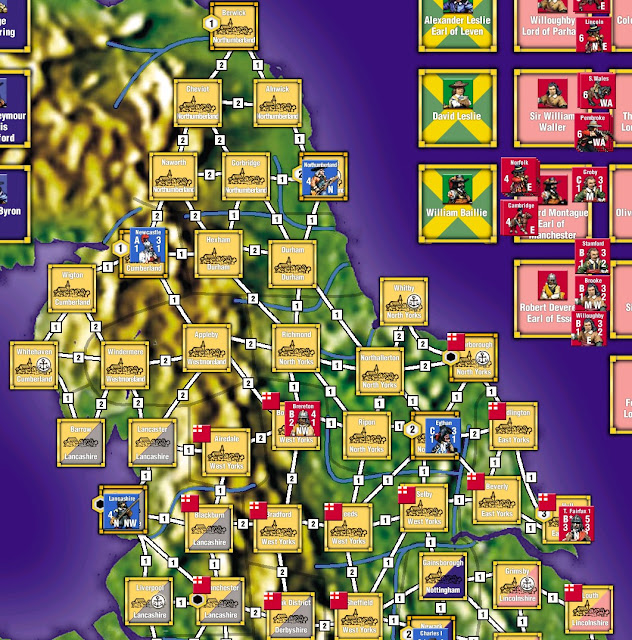 Game Notes:
A very important month, as the Royalists launched three important offensives.  Prince Rupert came quite close to being able to attack London and with his ability to assault cities, might just have carried it off.  As it was, the Parliamentary forces were able to relieve the city and push Prince Rupert away, although at some cost.  The King's effort to relieve Newark was more straightforwardly successful, since he relieved the city, caught Manchester's retreating army and defeated it.  Cavendish also successfully relieved Chester.  Overall, the situation seems to have tilted in the King's favour except in the South, where the slow but relentless advance of Bedford and Hampden have secured almost the whole south coast for Parliament.  The key thing for the King will be to decide where to launch his next offensives: at London, at Hull and the North or Southwest to retake the important recruiting areas of Somerset, Dorset, Devon and Cornwall.

King Charles, having left command of the main Oxford Army to Prince Rupert for his attack upon London, moved to Shrewsbury to take command of the smaller armies of Sir Rupert Vasey and the Earl of Forth.  Initially he considered that he might strike at Brereton or Waller, but decided that Sir Charles Cavendish's army was strong enough to deal with the former on his own.  A strike southwards towards Gloucester and Cardiff to drive back or defeat Waller looked tempting, but on further consideration, he realized that a strike against the larger Parliamentary army currently besieging Newark was feasible.  The numerical odds would be even but the King was confident that the greater training and experience of the Royalist Horse would give him a crucial advantage in the upcoming campaign.

The Earl of Manchester largely shared the King's diagnosis and when approached, lifted the siege and attempted to retire.  However, the King, showing some flashes of brilliance, moved too quickly for the Parliamentarians and forced the Earl of Manchester to turn and fight near Long Bennington as he moved south from Newark... 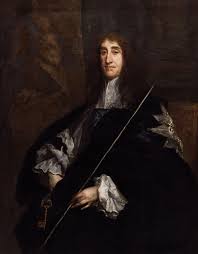 
Game Results: A clear victory for King Charles, with the Earl of Manchester's army having suffered heavy casualties and had one of its flanks turned, with the other holding on by a thread.

Strategically the results have been just as great for the King as the tactical: Newark has been relieved, the Earl of Manchester has been thrown back into East Anglia and the main routes from North to South are firmly in the King's hands, giving him the power to threaten in all directions.

Game Notes: A poor deployment by the Earl of Manchester (okay, me) contributed to the defeat, although given the preponderance of veteran Royalist Horse, it is difficult to see on that terrain what a really secure deployment would have looked like.  It may have been better to forego the attraction of the forward defensive position and only defend the rear hedge-line to create a more compact position and threaten the flanks of the advancing cavalry a little.  That said, King Charles was very careful to develop his secondary attacks to pin the Parliamentary forces anyway, so it may have been the case that, given the terrain generation, there was simply very little that the Earl of Manchester could have done.
The failure of the initial Royalist Horse attack shows that, even when the odds make it a worthwhile gamble, using the charge mechanism for "Swedish" Horse can still get one into trouble!
Note that flank attacks in enclosures are hard to make work very well, because the moving troops are continually taking shaken levels simply for moving in the enclosure.  This makes successful attacks slow, where possible at all.
Incidentally, although I generally avoid mechanisms which place any pressure on my ability to "role-play", I do make sure that if an army has attempted to evade combat but failed in the campaign rules, then it does have to make an honest attempt to defend its position rather than just deploy on its baseline and walk-off.  I rationalize this by saying that when caught in this way, it must fight to protect its (off-table) baggage and supplies, otherwise the army will lose more from desertion and illness than it would in the actual battle.
So, an interesting and fun game even though the Royalists did win reasonably comfortably.

Rules were the Polemos ECW set, figures by Baccus 6mm, buildings by Timecast. 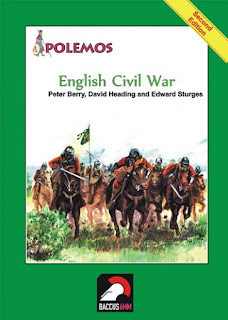