Caesar persuaded the Atrobates to abandon Ariovistus, but in his turn, Ariovistus was able to bring the Cardurci back onto his side.  Caesar then ordered his XI and XII Legions, accompanied by the Aedui, to attack the Mandubi.  The Mandubi attempted to defend Alesia, but after a short if bloody siege, the stronghold fell to the Romans and their allies.  Ariovistus concentrated on further diplomacy, persuading the Andes to join him.
Increasingly desperate to try and make some real progress, Caesar led the IX and X Legions to join the Averni, whilst the VIII Legion moved to join the Allobroges.  Ariovistus continued his run of diplomatic successes by getting the Tolosates onto his side.
A Gallo-Roman force (the Arverni, VII Legion and the Roman Cavalry) attacked the Cardurci in their fortress of Uxellodonum.  Although victorious, the siege was incredibly bloody, with the Cardurci and Arverni being reduced to mere remnants, and the Roman units combined only numbering around 2000 men.  Caesar meanwhile defeated the Santones at the Garumna, although losing quite heavily in the process; his pursuit did manage to eliminate all the resisting Santones, however.

Ariovistus' diplomacy finally failed him, when he failed to persuade the Britons to throw their lot in with him; whilst Caesar persuaded the Treveri to join him (again)!  However Ariovistus quickly moved and eliminated these rebels.*

At this point, Caesar called off the campaign.  Hoping that his string of battlefield successes would cover for the ultimately unsuccessful prosecution of the campaign, which he was hoping to recast as a punitive raid, he, with some trepidation, returned to Rome...

Position at the End of the Campaign: 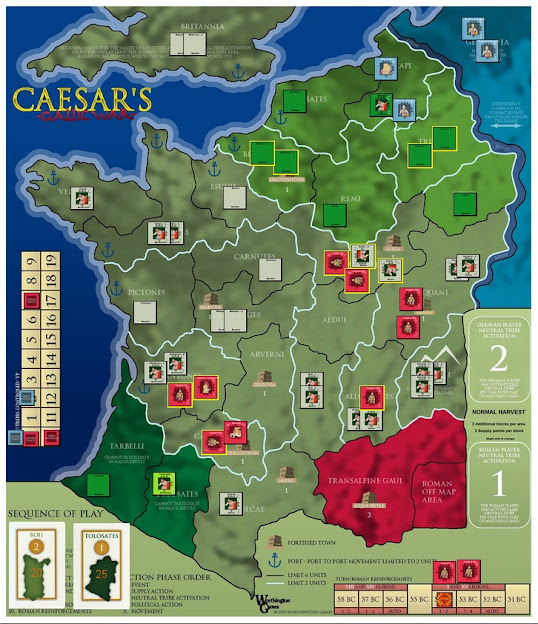 Game Notes: Well, it was good fun while it lasted, but it fizzled out somewhat when I realized that Caesar couldn't win!  My strategic play as the Romans had been so bad that Caesar basically had no chance; with the major Gallic rebellion still to come it was inconceivable at this point in the game that Caesar could conquer enough territories to win.  So, my fault, basically. 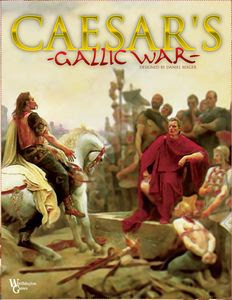 Why was this so?  Again, my fault: in the test games of Caesar's Gallic War, I had done a reasonable job in teaching myself mechanically how the game worked, but because the optimal strategies for both sides are so different, I hadn't really appreciated until too late the real nature of what both sides had to do to win.  More by good luck than good management, my Ariovistus decisions really helped his cause whilst I was doing terribly and not even realizing it as Caesar.  I allowed too many tribes to go be in a position to go back to Ariovistus (who was admittedly a little lucky overall with the success of his diplomacy) rather than taking more risk to hold ground.  So by late 54 BCE, Caesar had so many territories to conquer that there just seemed to be no chance to pull it off, so he conceded.  I am looking forward to trying this one again at some point, but I need to play the boardgame a few more times to better grasp the nuances of how the mechanics and the VP-system interact, rather than just generating battles.  I will definitely be learning from this for future boardgame-driven campaigns.