This was a replay of the second battle in the campaign, scenario six from the TooFatLardies' Scottish Corridor mini-campaign book. 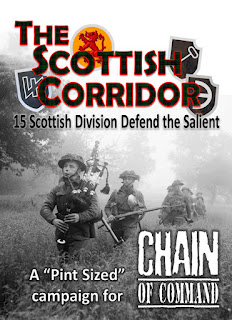 As I will explain in the game notes, I didn't stick with the WRG 1925-1950 rules that I have used thus far, but instead mashed together that set with the TooFatLardies' "Chain of Command".

Recent campaign games had worried me a little that the Germans just did not have sufficient chance of winning.  I was using the WRG 1925-1950 rules along with the "Threat Generation" solo system published in Miniature Wargames 373: 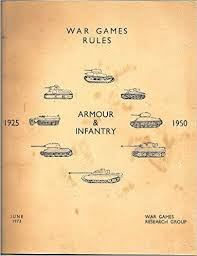 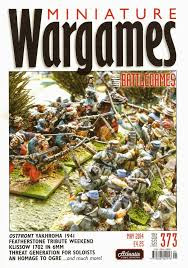 And whilst this gave very exciting games in general, playing one side obviously gives the player incentive to play against the system as hard as possible and "win" the game by beating the system.  However, experience has shown that if I play sensibly and methodically, I'd have to be quite unlucky to lose.  So in this game, I decided to experiment with something else.

There are two main reasons I haven't been using the TooFatLardies' Chain of Command rules for the games so far.

Firstly, my 6mm troops are based in elements and Chain of Command uses a figure-removal system.  Secondly, the Chain of Command rules are heavily interactive, in that players have to make decisions in both their turn and their opponent's turn.  So what I decided to try in this game was to keep the firing, movement, visibility and morale elements of the WRG rules, but use the patrolling and activation systems for the Chain of Command rules, whilst limiting the "out-of-turn" options to opening fire on a visible target.  This means that the "non-active" side can get a couple of additional shots off, but can't immediately open fire on troops they can't see.  For instance, in the game played above, the British infantry in the buildings could fire on the German infantry in the open field but couldn't fire on the German infantry section which was activated that turn, because it was in the hedge and over 50m away.

I was very pleased with how it worked and it created a very close game.  I'd warn players about one thing though: the realism levels are high in this game!  So, infantry can get suppressed easily and it makes dismounted manoeuvre hard and tank combat is often decided by who gets off the first shot.

For future development, I may look at how the combat system in Chain of Command can be made more "element" friendly or alternatively how a more extensive junior leadership system can be incorporated into the WRG rules.

Played on a 3'x2' board, buildings from Total Battle Miniatures and figures and vehicles were mainly from GHQ in this game.

I had a go at refighting the Battle of Golymin, which took place during Napoleon's campaign in Poland against the Russians and the Prussian remnants of the disasters of October that year.  There is a good accoutn of the battle here.  The scenario I used was the one published in Baccus' Napoleonic Companion. 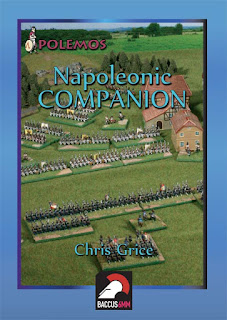 The scenario is designed for the Polemos General de Division rules.  The contending forces were as follows: 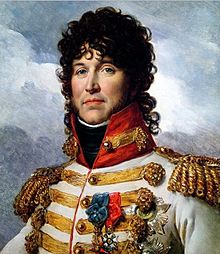 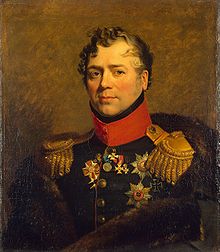 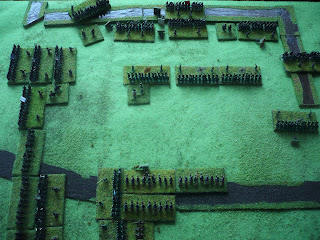 I halted the battle at this point, deciding that Murat and Augerau would decline to renew their attack after the defeat of Davout's Corps and the heavy losses of infantry which had been suffered.  The Russians too had suffered heavy casualties but their formations had held on and there was now little prospect of a French victory, but every prospect of a crushing defeat.

A very interesting and tense battle.  It took longer than usual, perhaps just over 3 hours of game time.  I think the reason for this was that both sides proved quite resilient in their morale rolls, as well as the battle being very even.  It really could have gone either way until very late on!  For those familiar with my methods of playing solitaire, the base tempo points were as follows:

The French forces were treated as separate armies due to the disjointed nature of the French force.  If playing again, I may treat them as a single force commanded by Murat.  I don't think this was telling in the French defeat here: if anything, the Russian splitting of the French line early on would have been crippling for Davout's Corps.  What did make a difference was having many of the commanders stuck in the woods for large periods of the battle: this (realistically) reduced the command and control ability of the armies as the generals were out-of-sight of many of their subordinates.
I felt that both orders of battle were a little "flat", in particular the French.  Their lack of veteran troops and expert skirmishers was a critical weakness - and to be frank, not weaknesses normally associated with the French in 1806! Additionally, the commanders' ratings are arguable, to say the least.
As ever, the Polemos General de Division rules gave a good game, full of command difficulties and abstracting in the right places.

Game played on a 5'x3' table.  Figures by Baccus, and buildings by Timecast I think.  Incidentally, there were about 1500 figures on the table: that is why I love 6mm for big battles! You can get lots of figures on a very average sized dining table and play a game that gets a result in a short time.

The Battle of Ellendun 825AD 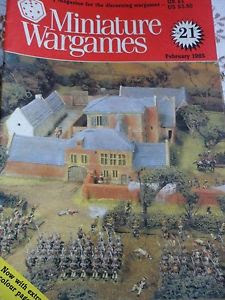 
Outcome:
A very swift and easy Wessex victory.  The Mercians outnumbered the Wessexmen but the combined effects of thirst and fatigue more than swung the balance in favour of the southerners.  The Mercians lost seven(!) bases, which is massive in the context of these rules.

Game Notes:
The additional factors did seem to simulate the Mercian condition accurately, as the results of the refight seem quite similar to those of the real battle.  The battle took just over 30 minutes to play out on a 3'x2' board.  The DBA 3.0 rules were used, with troops chosen from list III/24a. I wouldn't recommend this scenario as I did it for head-to-head play: it is too difficult for the Mercians to win unless they can get at least some of their troops watered and rested before they get into combat.
Figures from Baccus 6mm.