The Peninsular War Campaign - A Review of the First Game Year

I began my refight of the Peninsular War on 12th September 2013 so it has been going on for nearly three years now.  I haven't hammered it, having a large young family, an engrossing job and many other interests, both outside and inside gaming.  And this morning I completed the first year of "game time": the game clock has reached 1st July 1809.

Overall, I don't think that the campaign has been too different from the original and nothing has felt too implausible: a credit to the Tomb for an Empire campaign rules.  Although there have been a couple of minor glitches, in general the campaign rules have been able to interface with the battle rules, Polemos Napoleonics, successfully.  The glitches, such as they were, have been:

Getting the correct, plausible amount of artillery on the map.
Deciding on how exactly one of the key attrition mechanics should work.
Getting the "march to the sound of the guns" mechanism correctly calibrated.

As a solo player, the basic mechanic I use to generate uncertainty is a card draw to activate formations of either side (although it has several nuances).  It has worked very well!

As for the course of the campaign, I think that overall, the Allies are just shading it.  The French have gained more ground in the East more quickly, with Zaragoza and the majority of the Catalonian forces in French hands already.  However, the Allies largely avoided the series of disasters which befell the real Spanish armies when Napoleon arrived in real life, by being a lot more defensive and being quicker to retreat.  And the key difference was that the British Army was able to retreat along a prepared route towards Lisbon, rather than a mad rush to Corunna to avoid being crushed by massively superior forces.  This has left a rather larger Allied army in being, which has been able to successfully fend off the main Imperial attack.

I don't know how the campaign will run from here.  I think that the situation in the East is fairly balanced and could go either way.  I think that the Imperials will have to await further reinforcements before making another serious attempt to complete the invasion of Portugal and attempt to defeat the Allied army.

The campaign has mainly been a very interesting and diverting experience.  I have enjoyed refighting the battles, which have been of vastly different sizes and force compositions and with different, nuanced aims.  But the best moment was a couple of months ago.  I was thinking of Wellington's next move, considering his options and the various possible French reactions when suddenly I thought of a passage from Petre's Napoleon's Conquest of Prussia.  This was the first 'serious' Napoleonic history book I read, taken from Peterlee public library in c.1987.  As I was going through the various options of Wellington's in my head, whilst staring at the game map, I felt myself thinking of it in the same way I had read that passage discussing Napoleon's plans and options those many years ago.  And that, to me, is what has made this a successful campaign game.  I don't think that a wargame can easily replicate the decisions an actual general makes: but it can replicate the way we think of those events as readers, perhaps even critics.  And that may be one of the virtues of a good historical campaign game.

I am looking forward to seeing where my campaign goes next!  I am hoping to get more game time this year, and perhaps next year too.  I want to try and improve both my terrain and my photography too, to make my battles and my blogposts more eye-pleasing.  And, of course, just add the odd new unit, here and there...

Thanks to all those who have read, followed and commented on the campaign so far.  In particular thanks to Paul Leniston, whose example inspired my own efforts.
Posted by JWH at 18:17 No comments: 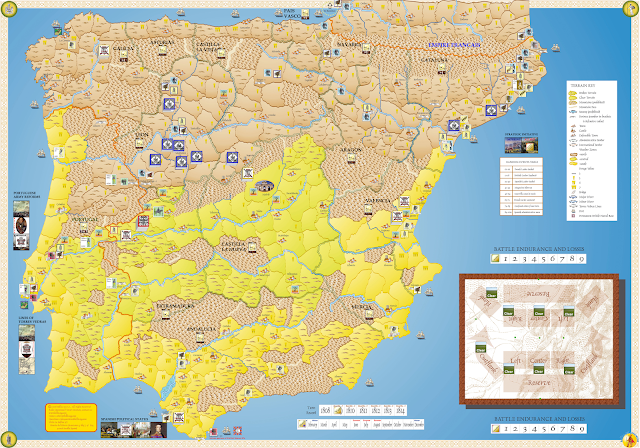 Summary of Events:
Joseph initially began to move towards Elio's Fourth Spanish Army, based near Madrid but Elio's manoeuvrings convinced him that he would be chasing a shadow whilst moving many miles through hostile territory with Wellington's Allied army at his back.  He therefore returned nack down the Tagus, not knowing whether to attack Wellington or merely feint and then run back to Leon to regroup on Moncey and Soult.  Wellington was aggressive, threatening Joseph's lines of communication to the North so Joseph reluctantly committed to an attack.  Seeing a fleeting opportunity to attack Cuesta's small Spanish army he attacked, but the prompt arrival of the Allied forces led to a French defeat and the loss of Marshal Ney as a prisoner and the destruction of a large proportion of his army corps, although not before serious damage had been done to Cuesta's forces.  Joseph did at least manage to escape and has withdrawn to Salamanca.  To partly compensate for the disastrous Tagus valley campaign against the Allies over the last few months, Mortier was able to storm and capture Ciudad Rodrigo in a brilliant action, thus opening up an alternative invasion route for the French (n.b. see here for details of the actual taking of Ciudad Rodrigo).  Soult has withdrawn slightly from Astorga, to Benavente, in order to be in a better position to support Joseph if attacked by Wellington, whilst still being able to cover any advance by Mahy from Galicia into Leon.  Right at the end of the month, Moncey's III Corps carried out a lightning advance eastwards with the aim of checking Elio's advance over the mountains into the Segovia area.  Elio had no intention of fighting however and successfully covered by his stronger cavalry, was able to retire safely into the mountains.
On the East coast, St-Cyr withdrew from the Valencia area, fearing starvation in the desolated ground and the combined strength of the Spanish Armies of Valencia and Catalonia.  He carried out a storm of Tortosa as equally brilliant as Mortier's actions in the West, which cost the Spanish 5000 casualties in dead and prisoners.  A second attack on Tarrogona failed, however.