I got Labyrinth: The War on Terror to the table properly for the first time yesterday.  It covers the post 11 Sep 01 US War on Terror campaign.  The basic aim of the game is to defeat the Islamic terrorists by producing enough stable, friendly, well-governed states in the Dar Al-Islam that there is no opportunity for radical Islamists, whilst preventing terrorist plots that might destabilize the non-muslim world, in particular the detonation of WMD in the USA. 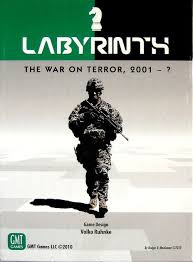 It is basically a card-driven game, with each card potentially giving rise to events (which may favour the US, or the Islamists, or both or neither) and also allowing each side to carry out operations.  As might be expected, the Islamist are trying to recruit operational cells, which may carry out terror plots or attempt jihad and bring down governments and install radical Islamic regimes instead.  The US on the other hand can move troops, invade countries, try to improve governance and foreign relations and/or counter terrorist plots. It is a strategic-level game about the allocation of effort and resources at the international level, so those wanting more detailed treatment of tactics and operations will have to look elsewhere.

There are lots of neat mechanics to give problems to both sides and make using the USA's vast power and influence quite difficult.  The way the card deck works mean that both players can sometimes end up playing cards that advantage the other side because they want to use the value of the card to carry out operations, so it is a judgement whether the positive value in using the card outweighs the side effects.  Many cards have different effects depending upon which side plays them.  All the cards are dealt from a single deck, there aren't separate decks for both factions in the usual set-up, although there is a way of doing this to create a more balanced game (it can be tricky for the US player if their hand is entirely composed of events which benefits the radical Islamists!).  Like many other modern games, the use of cards creates friction and allows for complex interactions, but I imagine some players will find the slightly arbitrary nature of this friction annoying. 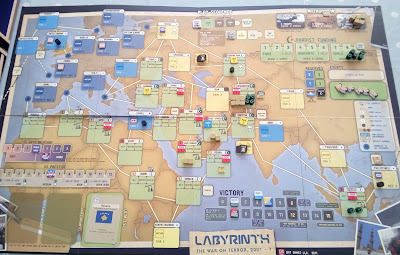 The game contains a full system for solitaire play and also has methods for varying the difficulty of that play, by changing the effectiveness and efficiency of certain terrorist actions.  At the initial difficulty level, I thought the game was challenging but winnable, even quite quickly after learning the mechanics.  There are fully worked play examples for both 2-player and 1-player games: these were really useful for getting an intuitive understanding of how play is meant to progress.  None of it is complicated - the mechanics are elegant - but there is a lot of stuff to remember to begin with.

The mixture of the card events and the way play progresses create quite an interesting narrative feel to the game - it does feel like an 'alternative history' is unfolding.  Players will recognize many of the events and concepts on the cards ("Abu Sayyaf", "Tony Blair", "Chirac & Schroeder" etc.), creating the right feel for the game.

I have only played it a couple of times so far, but it was a captivating game, with lots of potential for different strategies to be tried out.  My strategy so far has been to focus as relentlessly as possible on Afghanistan, Saudi Arabia and UAE, which seems to have been reasonably effective, but I am very much still learning.

Recommended to all those interested in the subject, particularly those looking for a solitaire treatment of a game set at the grand strategic level.
Posted by JWH at 07:11 No comments:

How on earth did that happen?

I was taking the advantage of some quiet time today to do a bit of sorting out of my 15mm WW2 stuff, basing a few figures, repairing a few damaged paint jobs, that kind of thing when it became clear that my little side project for doing WW2 section and platoon skirmishes now has over 500 figures and 30+ vehicles! How on earth did that happen?   The stupid thing is I will never play with anything but a fraction of this lot at one time: I much prefer using 6mm stuff for reinforced platoon / company (-) actions upwards.  And it isn't as if I particularly enjoy painting or anything.  It has been a small trickle of accumulation over the last...nine years?  There is stuff in there from Battlefront, PSC, Peter Pig, Zvezda & QRF I think... 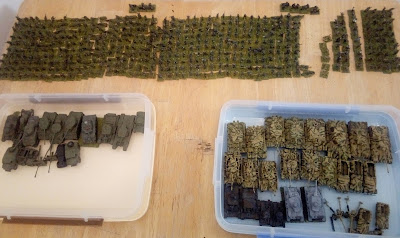 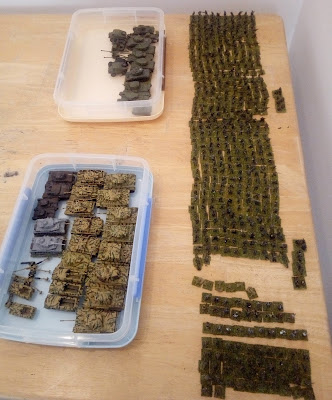 And the even more stupid thing is, I don't think I have everything that I want!  I have too many 'core' troops, not enough of the one-off things which add interest to skirmish games.  A D+ for project management here I reckon.
Posted by JWH at 13:27 2 comments: