The Gallic War: The Battle of the Porta Silva Carbonaria (Battle 2)

Late Autumn 58BC:  Caesar's left wing had advanced up the line of the Rhone and the Moselle after Caesar's victory over the Helvetii, using a potent combination of force and persuasion.  Converting the Mandubi tribe to the Roman cause, they used their proxies in a joint attack on the lands of the Treveri.  As it happened, the Treveri had been seizing the territory of the Leuci and were reliant on their German allies to defend against the Romans.  Fearing his bands being defeated whilst isolated, Ariovistus personally crossed the Rhine to try and reach his German followers and Gaulish allies and inflict a defeat on the Romans...

The Scenario: A complicated little scenario this for the second battle in the campaign.  Initially, the Mandubi will attack the Germans.  A Roman force of two legions plus a cavalry force are force marching to reach the battlefield, whilst Ariovistus and more Germans, plus the Treveri warbands, are trying to reach the Germans defending against the Gaulish advance.  The shape of the battle will therefore be strongly determined by which reinforcements arrive first...

The Mandubi:
Two tribes, each of 4 bases of Raw Tribal Foot and 2 bases of Trained-Elite Cavalry
Their leader Biuito (Average, Rash) and an officer Rigant (Poor, Steady)

When/if the Romans arrive, Geta will assume command of the whole force.


If Ariovistus arrives, he will take over the force; until then Widald will command.

The arrival of reinforcing contingents is controlled by the dice.  At the end of each turn a die is rolled and a '6' means that the contingent arrives on the next phase of the relevant player.   The Romans will arrive behind the Mandubi, and Ariovistus behind the Germans; if the Treveri should arrive, it will be on the Romans' right flank.

The terrain generator made a slightly hilly but very open area around a stream in current North-Eastern France/South Belgium.

Game Notes:
One of the delights of campaigning is that it generates types of battles that don't come up so often in one-off battles.  This was reminiscent of one of the campaign 'warm-up' games I played, except this time it was the Romans who arrived first, and Ariovistus who didn't show up at all.  Naturally this determined the overall flow of the battle.  The only thing I think I need to change is one of my campaign-wargame translations: basically each force in the campaign rules has a number of strength points, which I have made equivalent to two Polemos:SPQR bases.  Except for the specified cavalry units, all of the units are made predominantly of infantry but one strength point can be divided between cavalry and skirmishers.  However, it is so obviously better in these rules in most circumstances to take the cavalry rather than the skirmishers, I am going to amend this in future to a point must be taken as 1 base cavalry, 1 base skirmishers.   Since all sides were affected equally in this battle, I don't feel any need to replay the action, it is just a note for going forward.
However, in the longer-term, I am not quite sure about how I feel about the effectiveness of cavalry in this game.  The author in his design notes seems to feel it possible that players will find cavalry underrated: I find this...surprising.
We'll go through an example: 2 Trained Cavalry bases attack 2 Trained Tribal Foot bases, each supported by another Trained Tribal Foot base behind.  So, first, the Cavalry will charge:

Cavalry charging = 4; Tribal Foot defending = 2 (i.e. a +2 advantage)
If the cavalry is elite, has a general close by, is armoured or charging flank or rear, or if the defender is overlapped, this advantage will be greater
If the foot is in cover or in fortifications, the advantage will be lower
Either side can gain an advantage by being uphill, or the other side beig shaken.

On an even roll, the Cavalry will charge home.  If it gets a single additional point of advantage by a better die roll or by having a general around or similar, the Foot will also become shaken.

Compare the same combat with DBA:
Cavalry 3 vs Warband 2 = a +1 advantage; the most likely outcome is a 'recoil' result for the foot, although it needs only a 1 point swing to make it a cavalry recoil instead (cavalry recoil on drawn combats).

So overall, I don't think it is obvious that cavalry are under-powered in Polemos: SPQR.  Whether they are over-powered is a different question...

I have just finished off another group for my 15mm Twilight 2000 / Cold War project.  This time, it is a platoon of US infantry and an M113.


I was reasonably pleased how these turned out.  Nice figures, easy to paint up.  They also match the Peter Pig guys I did last time.  I think the only thing I would like to add are some figures advancing with M60, and some troops with M21s to act as snipers.

I am not sure what I am going to do next, whether it will be more 15mm Cold War (British? German?), 15mm WW2 (Africa Korps?  Japanese?  or some 6mm WW2 stuff (given Baccus is closed for the moment, maybe some Russians from 2d6 Wargaming? Or some Polish from Irregular, or GHQ)? I don't really have anything very much to paint in the meantime...some from my pile of random 28mm stuff, perhaps.

Because this is the Heretical Gaming blog, it is part of the service to do the odd and the wrong.  In this case, to revive the 80s modern skirmish combat ruleset written by Bruce Rea-Taylor, Fire Fight. 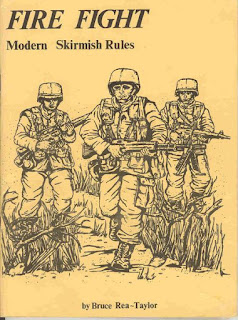 The ruleset is aimed at small-scale infantry actions from any conflict after WW2, so I set up a small Cold War Gone Hot scenario to get things going.

It is around 0930 in the morning after the Cold War has turned hot.  Soviet elements are moving rapidly forward.  A couple of Motor Rifle units moving forward have noted a small building astride a road on their battalion boundary - each have sent forward a reconnaissance patrol to discover whether it is occupied or not.

The US squad has put out a couple of pairs on watch, plus a sentry around the buildings watching the road.

Game Notes:
Reasonably short and sweet game, but quite interesting nonetheless.   The Soviets were very unlucky, they just kept on failing their observation rolls! The American shooting was reasonably accurate too, so a pretty hard day at the office for the Sovs.
Whenever I have read these rules, I expected a total horror of a game, but they did work quite well in practice.  I am not going to definitively say that they work in a certain way, because there is a reasonably high chance I have misunderstood some key concepts, but as far as I know...
The main mechanic in the game is a chit pull for initiative.  Each squad gets a number of chits equal to its initiative and then they get pulled out of a cup one by one.  Then, leaders in the relevant squad can activate themselves and others to do stuff.  Each activated soldier gets 4 action points to "do stuff", including move, observe, fire etc.  Better leaders get to activate more soldiers in one go, although they do have to be quite close to the leader (within 25m or so, or lower if out of sight or being under effective fire).  There are some reasonably detailed observation rules (which is good), and they make visibility very important (better), but the rules feel a bit under-written and under-tested in some areas, particularly in how they interact with soldiers who are out-of-command.  The firing rules seem complicated, but that is because key information is spread out through the book - once you have worked out what is going on, it is pretty intuitive even if it is d20 based.  It has different levels of damage and ineffectiveness, with different game effects for wounded, suppressed and neutralized (other gamers might think of suppressed as what is often called 'pinned' and neutralized what is often called 'suppression').   It seems to have its genesis in WRG Infantry Action 1925-1975, but house-ruled, modified and chromed to produce a new set.  It still shares that rulesets assumption that players are really going to put stance markers by each figure to denote standing, crawling, neutralized and so on, which I find hard to believe that anyone has ever done, and still enjoyed the game.  Anyway, I don't want to get into proper review territory, so I will leave it there for the moment.

Figures and models are by Battlefront.
Posted by JWH at 22:29 22 comments: