This action follows on from the action detailed in the re-fight of the first part of the Battle of Rowton Heath.  In essence, this is a re-run of the idea of the first battle but on a different part of the Heath with some reinforcements for the Parliamentarians.  The Royalist attempt to reinforce Langdale had been defeated, with ultimately disastrous consequences for the Royalists.  It would actually be worth fighting that action as a large skirmish, since it was ultimately the pivotal point of the battle and the campaign!  However, for this action the time is rolled forward to 4pm and Poyntz' second attack on Langdale.

I played these actions as two entirely separate games incidentally - the results of the first weren't "carried forward" to the second (because the optimal strategy of the Poyntz in the first battle is not to bother trying to do anything but rout the small elements of Royalist shot).

Check out here for a modern aerial shot of the battle area.

Please forgive the sub-standard photos in this post.  The lighting was particularly horrible and I have only been able to retrieve the images a little.

Game Notes: Another game which went according to form.  The Parliamentary infantry advantage allied to the inferior Royalist deployment (here the Royalists were inside the enclosures as opposed to defending their outer edge) gave Poyntz the advantage, which he exploited with brutal efficiency.  Yet again, the systemic advantage that Horse using Dutch tactics showed itself here and the Royalist Horse had a thin time.  As I have mentioned previously I think, fighting in difficult terrain actually increases the decisiveness of combat in Polemos sometimes, because everyone is fighting with a level of Shaken as a base level, making it that much more likely that a base will be broken rather than shaken and/or pushed back.  It increased the chances of breaking an opponent by musket fire, for example, which is otherwise very very hard to do.
An interesting challenge this game - I'd like to know how Langdale might do better, given the situation; and yet again, Polemos produced a result very close to that in history.

And that is it for Polemos ECW battles for a while!  I have completed ten games this year as part of the Boardgamegeek 10x10 challenge so I need to switch fire for a while; plenty of Polemos SPQR still to do...although I might play a few more ECW battles with the Neil Thomas Wargaming: An Introduction rules.

Rules were the Polemos ECW set, figures by Baccus 6mm
Posted by JWH at 15:53 No comments:

Battle of Adwalton Moor - A Wargaming: An Introduction Refight

After re-fighting the Battle of Adwalton Moor using the Polemos ECW rules, I then re-fought it using Neil Thomas' Pike & Shot rules in his Wargaming: An Introduction. 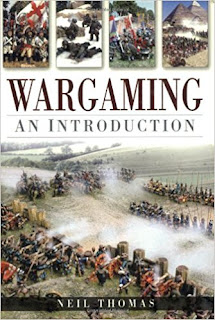 I won't go through the scenario details again, you can see them in the linked post above.

n.b. This was my reading of the forces in the scenario as written.  Comments for the previous refight using the Polemos ECW rules indicated that the Parliamentarian Foot should be rather better than indicated above, although I'm not sure how many of the ill-equipped raw foot were amongst them.  Perhaps better would be:

Also, re-classify the Horse as Chevaliers instead of Reiters.


Game Notes: A reverse of the situation that occurred in the twin refights of the first part of Rowton Heath: in this game, it was the Wargaming: An Introduction rules which were pretty lopsided in favour of the Royalists, since the attritional mechanic favours the bigger army and the lack of control rules mean there are no real limits on employing those superior numbers.  Making some of the changes indicated in the discussion on the order of battle above would help, but I don't think they would make that much difference, although it would be of slightly more interest.
Very observant readers will have noticed that the Royalist Army seemed to lose its artillery in the early stages of the battle!  This was a deliberate choice by me, since I remembered that artillery is both highly effective in Neil Thomas' rules and that would totally change the character of the game if I used it: the Royalist optimal strategy would be just to sit and blast a few units and force the Parliamentarians to withdraw or attack.  This is very different in comparison to the Polemos rules: artillery just isn't powerful enough to do that. Neil Thomas' rules aren't really designed to do these kind of smaller force versus larger force engagements.  To make it more of a battle, I would increase the Parliamentary force to 4 infantry units and 2 horse units, and restrict the Royalist force to 9 units (player's choice of which).

Miniature Wargames 86 contained a scenario for the Battle of Adwalton Moor. At first sight the scenario looks very unbalanced, but in the real battle, the Parliamentarians seemed to make a reasonable fist of it despite having inferior numbers, poorer equipment and lower quality troops, so I felt after due consideration it was worth a go. 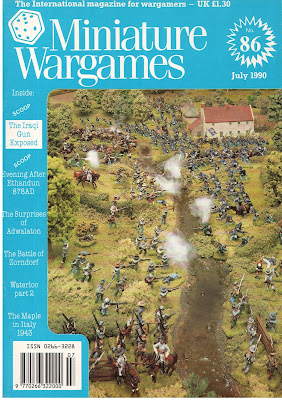 Part of me wonders why exactly the Parliamentary forces fought this.  It isn't a classic attack/defence battle (the odds were too great) nor is it a delaying action.  It was actually a Parliamentary surprise attack that didn't come off, but I don't quite understand why Fairfax persisted,  Nevermind...
The aim of the battle is for Newcastle to break the Parliamentary army whilst suffering as few losses as possible, whilst Fairfax is merely aiming to hold on, a draw here being as good as a victory.


Order of battle details are quite sketchy in the article.  Possible variants might include some variation in the ability and equipment of the Foot of both sides, in particular that of Parliament.  The Royalist forces should add up to 10,000 in total, but this might be 6-8,000 Foot and 2-4,000 Horse.

Game Notes: An interesting game, well served by the Polemos rules.  Their emphasis on shock enabled the Parliamentary force to put up a really good show - as did their historical forebears. The battle was won in a very historical way too - by Col Skirton pushing his men into and through the Parliamentary defences and breaching the line after a number of reverses.
The Parliamentary Horse continues its excellent showing in this series of games, fully exploiting the fact that it only needs to roll par to win.  Considering the odds, the Parliamentary Horse did nearly manage to pull off an unlikely victory before the Parliamentary Foot was defeated.  I'd be interested to know other gamers' views - what is the relative efficiency of Dutch cavalry tactics versus Swedish?
So a better game than the scenario promised, at first glance, which the Polemos rules enabled.