The Battle of Bemis Heights:

The action at Bemis Heights followed on from that at Freeman's Farm as part of what became known as the Battles of Saratoga.  A superior American force has spotted a British reconnaissance in force and intends to drive it back and if the opportunity arises, defeat the forces in front of it and take the defences. 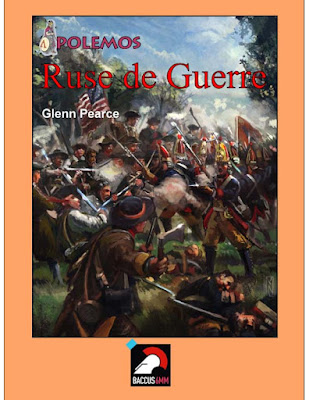 This is the  next scenario in the Polemos Ruse de Guerre rulebook.  As I did for the previous scenario, I have made it smaller by increasing the number of men/guns that each base represents and reduced the playing area to 3'x2'.

As in the last battle, I have re-set this into the War of 1812, since that is the period I have armies for!  It makes no difference in the rules...

*This unit is an amalgam of small contingents, hence the unusual rating.

The author makes the point that this scenario is biased somewhat in favour of the Americans.


Game Notes: A really enjoyable game, since, despite the American strength, this ended up being a close-run thing and the British had two moments when they could have won: Poor's brigade could have easily collapsed when hit from two sides, whilst, if Burgoyne had survived, he might have just stabilized the British right-rear long enough to form a much stronger defensive position.  Great fun!

The rules again performed admirably.  The British guns were a little lucky to survive repeated attacks, but not that lucky: they rolled just a little bit better than their opponents, which was enough.  The Americans had most of their luck early on, and crushed the British right in very short order indeed.

One thing I did notice is that I was using my generals in close combat far too much.  This is a hangover I think from other Polemos games.  In the Napoleonic rules, it hardly ever makes sense to leave them out: the bonus is high and the threat relatively low; so they should only avoid combat if one is certain you are going to win.  In the ECW and Roman rules, they should only go in if you think that they will win - the chances of them being lost are too high otherwise.  In Polemos Ruse de Guerre, it is neatly balanced: that bonus is handy, but the risks are just high enough to make me think that I should be doing it very rarely.

Once again I think that for solitaire play, my decision to reduce the number of bases and the size of the board is well rewarded by decreasing the time but increasing the intensity of the game play.

Figures as ever by Baccus 6mm, the buildings were  a mixture of Baccus and Leven.
Posted by JWH at 11:32 2 comments:

The Battle of Wavre: A Horse, Foot & Guns Scenario

The Battle of Wavre was the only one of the 'big four' battles of the Hundred Days that I didn't get to have a go at during the bicentennial year.  Never one to not right a wrong, when I stumbled across a scenario for it in Miniature Wargames 62, I decided that it would make an interesting scenario.

The original magazine scenario is designed for a big game using a 33:1 figure ratio but I prefer smaller games on smaller tables, so I re-designed it, also drawing on the scenario in the Polemos Napoleonic Companion, so it would be suitable for Phil Barker's Horse, Foot & Guns on a small 3'x2' playing area. 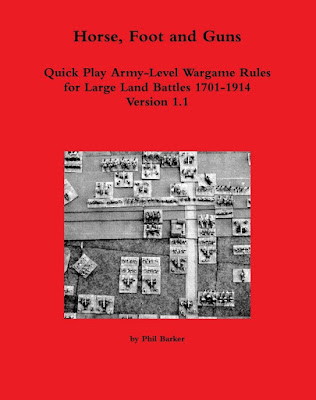 The aim of the scenario is for Marshal Grouchy to gain control over the river crossings as soon as possible: in this scenario the bridges at Limale and Wavre (there are four in the original scenario, but since the watercourse is only a stream, I felt that the important ones were those chosen - the Polemos scenario makes a similar determination).  Thielmann and his Third Corps must prevent them.

18th June lasts until the end of Turn 20.  If there is no result, fighting can continue until Turn 32.

n.b. Pajol is not represented and his Hussars are included in Exelmans Corps - his forces seemed too small to merit his inclusion as an individual Corps commander.

2 x Bayonets, 1 x Light Cavalry (I Korps' rearguard - withdraw on Turn 21 if still on the board at that point).


Game Notes:
A very enjoyable battle and I think a pretty successful scenario.  I did make a significant mistake, however: I think Exelmans command was 'defeated' and I missed it (I accidentally mistook one of Exelmans' Dragoon brigades for Gerard's, and vice-versa).  This had some impact, although I think that overall the battle would have turned out the same (the Dragoon brigade which attacked Thielmann at the end belonged to Gerard, not Exelmans).  The Prussians proved tough opponents and the simple-but-effective PIP system in Horse, Foot and Guns makes organizing a really first-rate combined attack quite tricky.  There was nothing in the game that struck me as too implausible.  The number of turns might seem excessive, but since it is a DBx game, then each turn rattles along quite quickly.  The only slowing element in the game is the number of firing die rolls (since both sides can fire twice in each turn), although this is hardly excessive.
The only thing that I dislike about HFG is that it theoretically allows several march moves by a single base in one turn, so if Wellington is really cracking the whip, the 52nd will cover 6.4km along a road in 20 minutes...obviously this is an extreme example, but I do dislike loopholes like that.  That said, if that is the worst that can be said for some rules, it must be doing something right - and these are!  I really do enjoy them for this level of combat...
I am pretty happy about my decision to play this scenario at this scale, since it allows an involved battle to be fought to a conclusion in a couple of hours.  I know that other gamers very much differ from me on this point, liking to have every battalion represented, but having 10-25 manoeuvre units per-side just works well for a fast but intense game, and I certainly won't concede it to be less realistic.  If anything, it is more accurate in focusing on the kinds of decisions a Grouchy or Thielmann usually had to make.
I counted Stengel's detachment as a separate force for morale purposes. In retrospect, I think this was a mistake and it should just be counted as an integral part of Thielmann's troops.  Otherwise, it would be better to ignore his force morale entirely (since Ziethen's Corps was doing just fine) and maybe roll a separate D6 for his PIP score, divind the raw score by 3 and rounding to the nearest whole number.

Figures by Baccus 6mm, except for some of the Prussians which are wooden figures from Commission Figurines, buildings mainly by Leven, some by Baccus.
Posted by JWH at 09:54 2 comments: