Neil Thomas Horse & Musket Scenario 011: The One Like Quatre Bras

For the 11th scenario in Neil Thomas' One Hour Wargames book, the author adapted that hardy perennial of the wargames table and a battle I never tire of reading about or gaming: Quatre Bras.  Obviously, this being Neil Thomas, he strips it down to the barest fundamentals... 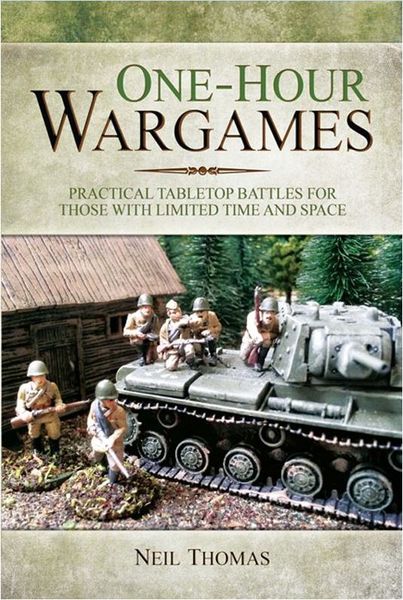 As previously, I am using Neil Thomas' Simplicity in Practice rules for the Horse & Musket period, published in Battlegames 023 and modified a little by myself. 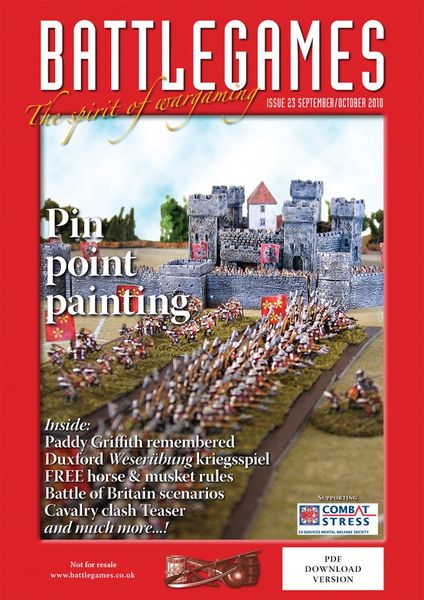 Structurally this game is quite similar to the previous two games, in that the defender's have a third of their force present, which is then reinforced in two further stages during the course of the game.  I slightly messed this up, but more of this in the game notes!

I will admit - six turns in, I did not see that coming!  Everything seemed to be going so well for the Franco-Jacobites.  In fairness, I did make one error which may have favoured the Hanoverians: one set of the reinforcements was supposed to arrive from the West (left) rather than both coming from the North (top).  I don't suppose it made too much difference though.  On the other hand, the Franco-Jacobites had what is usually the strongest force selection (with 2 artillery units) whilst the Hanoverians had none.  What the game really showed I think is the advantage of fresh troops in these rules - fresh troops don't particularly have an advantage in musketry or artillery duels in these rules, but they do get an advantage in melee.  The advancing Franco-Jacobites had suffered just enough in the advance that when a small number of fresh British troops arrived who could be thrown into battle without suffering from fire whilst advancing, mix in a little luck, and there you have it - a decisive victory!

Incidentally, in these rules, cavalry charging formed infantry in the front, even if the infantry have suffered some losses, is risky: not that it shouldn't be done, but that it is no sure thing.  So the French tried it twice in the battle: once it paid off (early, in the centre), once it didn't (later, on the right).  Neil Thomas avoids some of the pitfalls possible in Horse & Musket rules in which there are too many sure things: cavalry will never voluntarily charge a square, because it is suicidal; or infantry in line will never voluntarily stay in line versus cavalry, because it is suicidal. Neil Thomas found a quite decent balance point in these rules.

As ever, figures are from Baccus 6mm War of the Spanish Succession range.

Incidentally, Quatre Bras is a battle I have refought quite a few times, some of which are on the blog:

This is it re-fought with Polemos Ruse de Guerre.

This is it re-fought with Polemos Marechal d'Empire.

And this is it re-fought with Horse, Foot and Guns

Not sure what you would all think, but I think Neil Thomas did a pretty good job in distilling something of the essence of the battle into a very simple but playable and recognizable recreation: very impressive.  I have enjoyed all of the battles so far in this series, but this was a particularly good one.

Of course, it isn't a new thing setting Quatre Bras in the C18 - there was a very pretty game put on at Partizan a few years back. 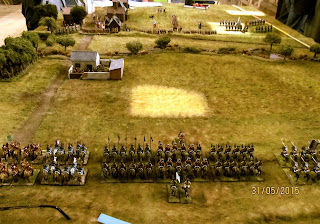 Having inadvertently inverted this scenario the first time I played it, but having a great game nonetheless, I decided to play this scenario again the way the designer intended!  Once again, the rules used were Neil Thomas' Simplicity in Practice horse & musket set, with minor modifications.  This time the defenders are still trying to stop the advance of the attackers as piecemeal reinforcements arrive but the attackers must take the town and exit from its road instead.

The Hanoverian Army:
5 Infantry units
2 Artillery units
2 Cavalry units
The Franco-Jacobite Army:
6 Infantry units
1 Artillery unit
2 Cavalry units
I won't re-iterate the scenario details at length, since they remain the same as the first time I did the scenario, but essentially the Hanoverians have 15 turns to capture the town and exit the board; the the Franco-Jacobites start with 3 units on the battlefield, and are reinforced by 3 further units on turns 5 and 10.

There was an interesting comment on the previous scenario (from Steve) that one of the best ways to win as the defender was to simply occupy the town, which given the timelines involved would be very difficult for the attacker to take in time.  Thinking about it, I don't think this would work in  my version of the rules and scenario, since the attackers could win by ignoring the town and defeating the rest of the army, because my modifications bring in army morale rules.  The other change - having more units in play - exacerbates the problem because more of the defender's force would be outside the town, proportionally; and keeping units out of the fight in Neil Thomas' rules is always problematic, because ideally you want as many units contributing to the fight as possible (which is reasonably standard for rules which are quite attrition-based). But if you didn't have them, then it probably would be the better strategy.  I only bring this up because it shows how even rules modifications which have on the face of it nothing to do with the scenario itself can have huge effects on optimal strategies.  This actually inspires some further thoughts on 'realism' in rules, but I will save those for another time.
In any case, lots of fun and a real nail-bighter this one: the Franco-Jacobites were quite badly affected by the loss of their general near the end, which meant that more or less every unit simply had to fight it out where it stood!  Luckily, the British were not quite in a position to get into the town in time despite breaking the Franco-Jacobites: one more turn would have done it! So incredibly close, but honours to the Franco-Jacobites in this one...
Figures by Baccus 6mm, buildings by Leven and Timecast.
Posted by JWH at 07:07 2 comments: