The Battle of Brienne 1814 - A Polemos General de Division Refight

The Battle of Brienne

As I am an honorary member of the Napoleonic Miniatures Wargames Society of Toronto, Glenn Pearce sends me scenarios from time-to-time to have a go at more-or-less simultaneously with their own game.  As they put on quite big multi-player games and I put on small-board solo games it does make for an interesting contrast.  Typically I would use the same rules as they use - the Polemos Ruse de Guerre rules - but on this occasion, for reasons I will come to at the end, I used the rules that are in some senses their direct ancestor, the Polemos General de Division set.

The actual 1814 campaign is fascinating and the Brienne and La Rothiere battles particularly so. In essence, Napoleon was trying to defeat Blucher and drive his troops into the Aube before they could be succourred: a difficult task, since Napoleon's forces were not substantially larger than Blucher's.


There was some minor additional action as night fell but nothing of any great importance happened, so I didn't bother to record it.  Essentially Grouchy demonstrated against Pahlen but didn't attack; Ney arrived and demonstrated against Olsufiev who retired to his starting positions, but both sides declined to attack.

Game Notes: Quite short and sweet this one, since Blucher (or more properly, Olsufiev and Scherbatov) could do - or at least roll - no wrong and Victor's attack entirely miscarried...this left Napoleon too weak to attack again with much hope of success, but every chance of being utterly destroyed.  Since this is a 'one-off' game I maybe should have tried but I don't typically play it like that, it somehow feels a bit game-y and destroys the immersion - I probably should re-think this!

Anyway, this was also partly the reason I wanted to give this a try with Polemos General de Division first: I suspected that it might struggle to replicate the real battle...and it did a bit: this is because attritional offenisve strategies can rarely work in Polemos GdD - fire is just too indecisive and really struggles against defenders in buildings, but close assault is risky and difficult too.  I suspect it will be a bit easier for the French in Polemos Ruse de Guerre to get a decent assault going.

In comparing the two rulesets, there is only one thing which is perhaps more tricky in RdG than GdD, especially for the solo player: it has many more 'dials' for influencing the initiative (i.e. tempo).  Individual brigadiers are rated for competence, as are divisional commanders and corps commanders in this type of battle.  There is also an extra stage in the tempo process.  As a solo player, that can be quite a lot of extra stuff to record and remember although for the multi-player games that some of these scenarios are designed for, it isn't a problem at all.  Anyway, I am looking forward to giving this a try with RdG soon.

More importantly than any of that though it was just good to get a game back on the table.  I have sorted out my stuff and hopefully this will enable a few more games to be played, although I will have to approach things in a different way: I will struggle to leave things set up the way I have in the past, so I will have to be more disciplined and prepare games like I was going to a club - set-up, play, take down and put away.

Figures by Baccus 6mm, buildings mainly by Leven in this one.

And just to round off, here is a picture of the Toronto club's game:

Having just finished a long-running educational commitment, I had been looking forward to resuming gaming with gusto at the beginning of September, getting the next battle of my Gallic War campaign fought and bringing some of my new toys to the table. Life has not worked out like that!  The demands of my growing family for space have meant that I am again without a viable gaming space currently, until I can swap things around sufficiently to make one.  I may end up back in the garage, although it is pretty much a storeroom currently and does get pretty chilly in winter.  I can start playing on the kitchen table, although that never really works as well as it might: my house is just too busy a place and crucially there is nowhere to store my toys close to it.  Storage space generally is becoming tight, even for my primarily 6mm-focused collection. So what to do?

One possibility would be to concentrate on a few low model-count and low terrain-count games.  Another would be to concentrate on playing boardgames more and leaving miniatures games for my rare face-to-face encounters.  Both these courses of action might imply big changes to my gaming plans and although I do like smaller games and boardgames, I do like to play the bigger actions in a wide variety of periods too.  But my home gaming seems to be hitting some kind of physical limits at the moment, and I am not quite sure how to overcome them.  Wish me luck!

A little while ago, Sean from God's Own Scale podcast asked to interview me for one of his shows.  I was happy to oblige and Sean has now released the results - please check it out here.

We talk about 6mm figures, Polemos and WRG rules, solo gaming, campaign games and much else...

Very many thanks to Sean for inviting me on and putting the show together.

Email ThisBlogThis!Share to TwitterShare to FacebookShare to Pinterest
Labels: 6mm, God's Own Scale

I have been adding to my 15mm Cold War Gone Hot forces recently, with some more models from Battlefront.  This time, it is the Brits!


I really enjoyed making and painting these, although my painting doesn't really do them full justice.  But they will look nice enough at table distance.  I hope I won't be too long in getting them to the table, although these were done during breaks in dissertation writing, which may prevent much gaming over the next week or so.

I am not sure what will be next, but probably WW2 Soviets or 15mm Afrika Korps.  I was quite excited to see that Baccus are queing up their new releases, and 6mm Desert War would be a very strong temptation for me... 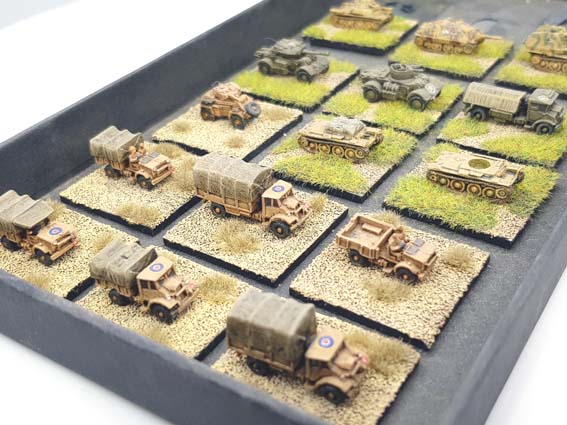 The Gallic War: The Battle of the Porta Silva Carbonaria (Battle 2)

Late Autumn 58BC:  Caesar's left wing had advanced up the line of the Rhone and the Moselle after Caesar's victory over the Helvetii, using a potent combination of force and persuasion.  Converting the Mandubi tribe to the Roman cause, they used their proxies in a joint attack on the lands of the Treveri.  As it happened, the Treveri had been seizing the territory of the Leuci and were reliant on their German allies to defend against the Romans.  Fearing his bands being defeated whilst isolated, Ariovistus personally crossed the Rhine to try and reach his German followers and Gaulish allies and inflict a defeat on the Romans...

The Scenario: A complicated little scenario this for the second battle in the campaign.  Initially, the Mandubi will attack the Germans.  A Roman force of two legions plus a cavalry force are force marching to reach the battlefield, whilst Ariovistus and more Germans, plus the Treveri warbands, are trying to reach the Germans defending against the Gaulish advance.  The shape of the battle will therefore be strongly determined by which reinforcements arrive first...

The Mandubi:
Two tribes, each of 4 bases of Raw Tribal Foot and 2 bases of Trained-Elite Cavalry
Their leader Biuito (Average, Rash) and an officer Rigant (Poor, Steady)

When/if the Romans arrive, Geta will assume command of the whole force.


If Ariovistus arrives, he will take over the force; until then Widald will command.

The arrival of reinforcing contingents is controlled by the dice.  At the end of each turn a die is rolled and a '6' means that the contingent arrives on the next phase of the relevant player.   The Romans will arrive behind the Mandubi, and Ariovistus behind the Germans; if the Treveri should arrive, it will be on the Romans' right flank.

The terrain generator made a slightly hilly but very open area around a stream in current North-Eastern France/South Belgium.

Game Notes:
One of the delights of campaigning is that it generates types of battles that don't come up so often in one-off battles.  This was reminiscent of one of the campaign 'warm-up' games I played, except this time it was the Romans who arrived first, and Ariovistus who didn't show up at all.  Naturally this determined the overall flow of the battle.  The only thing I think I need to change is one of my campaign-wargame translations: basically each force in the campaign rules has a number of strength points, which I have made equivalent to two Polemos:SPQR bases.  Except for the specified cavalry units, all of the units are made predominantly of infantry but one strength point can be divided between cavalry and skirmishers.  However, it is so obviously better in these rules in most circumstances to take the cavalry rather than the skirmishers, I am going to amend this in future to a point must be taken as 1 base cavalry, 1 base skirmishers.   Since all sides were affected equally in this battle, I don't feel any need to replay the action, it is just a note for going forward.
However, in the longer-term, I am not quite sure about how I feel about the effectiveness of cavalry in this game.  The author in his design notes seems to feel it possible that players will find cavalry underrated: I find this...surprising.
We'll go through an example: 2 Trained Cavalry bases attack 2 Trained Tribal Foot bases, each supported by another Trained Tribal Foot base behind.  So, first, the Cavalry will charge:

Cavalry charging = 4; Tribal Foot defending = 2 (i.e. a +2 advantage)
If the cavalry is elite, has a general close by, is armoured or charging flank or rear, or if the defender is overlapped, this advantage will be greater
If the foot is in cover or in fortifications, the advantage will be lower
Either side can gain an advantage by being uphill, or the other side beig shaken.

On an even roll, the Cavalry will charge home.  If it gets a single additional point of advantage by a better die roll or by having a general around or similar, the Foot will also become shaken.

Compare the same combat with DBA:
Cavalry 3 vs Warband 2 = a +1 advantage; the most likely outcome is a 'recoil' result for the foot, although it needs only a 1 point swing to make it a cavalry recoil instead (cavalry recoil on drawn combats).

So overall, I don't think it is obvious that cavalry are under-powered in Polemos: SPQR.  Whether they are over-powered is a different question...