This scenario is the first scenario in Battlegames' 'Tabletop Teasers' compilation and is a reprint of the very first such article, published in 'Battle for Wargamers' magazine in February/March 1978. 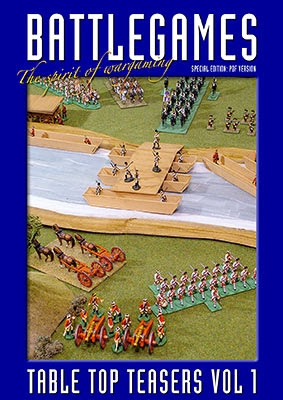 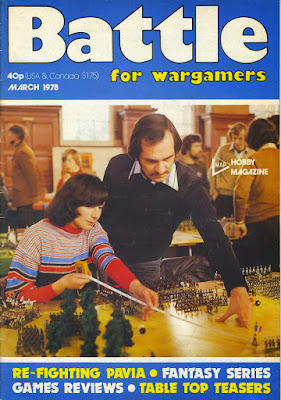 It features an attacking force which has been scattered in a night march attempting to force the passage of a river before a defending force can retreat over the bridge and destroy it.

I set this scenario in a nominal1809, featuring Austrian attackers against a Bavarian defending force, trying to stop the advance of one of Archduke Charles' columns...

Scenario Notes:
The Austrians are divided into 'packets' which arrive randomly during the first 6 turns on either road, except the light cavalry base and the commanding general, which can set-up anywhere on the roads or between the two on the East (top) side of the table.
The divisional generals are split between the two roads, each commanding the force that arrives on their respective roads.
The river is only passable at the bridge.
The Austrians win as soon as they force the passage of the bridge.
The game lasts a maximum of 18 turns (an hour-and-a-half).


Game Result: A very fierce and close-run struggle.  Battle casualties were approximately even although the Bavarians lost a few more in prisoners at the end of the game since their two bases of light infantry were cut-off.  However, the Bavarians held the bridge for long enough to demolish it and won the game.

Game Notes: As ever, the Polemos General de Division rules were used and they gave a good game.  For this game however I did some experimentation with the skirmish rules.  I dropped the SK factor (i.e. skirmish rating) and simply allowed light infantry units to fire at double range (i.e. close-range = 1 BW; long range = 2 BW).  They were also allowed to rally on formed units (although this did not actually happen in the game): if attacked and a formed infantry unit was 1BW or less away to the flank or rear, the skirmish base could be evade the attack and be placed behind or to the side of the unit in any position where it could not be directly attacked in the following turn.  It worked well, I was pleased, but it needs further experimentation.  The existing skirmish rules work okay, but they are not that intuitive.  They are basically a straight infantry assault modifier.  There is thus no sense of skirmishing taking time, it is just assumed to happen automatically before the assault.  Therefore trained Portuguese Cazadores tend to be just as good as Veteran Austrian Grenadiers in the assault: Trained SK2 is equivalent to Veteran SK0 in most infantry combat, although the Portuguese would be able to move quicker through woods, whilst the Austrians would have the advantage in musket volley fire and against cavalry.  Sometimes I mentally prefer this approach, other times I prefer having the distinctive skirmishers.  Polemos Ruse de Guerre, in many ways a development of the Napoleonic rules, uses the latter approach.  I think the Polemos Napoleonics' SK system could do with some refinements even on its own terms, however.  It would probably be more logical to have a 'flat' system so that all the units in a brigade have the same SK level, since in a set-piece battle situation the skirmisher companies would be acting as a whole for the brigade rather than supporting their individual parent battalions.  Rather than having a separate modifier for cavalry attacks on SK2 infantry units, but to avoid messing around with tracking the status of different bases, I think that just ruling that SK2 units become SK1 when enemy cavalry is within 4BW or whatever would achieve a better effect.  I do wonder too if the swing from SKO to SK2 is a bit too big: it might be better to classify all troops as SK1 or SK2.
Anyway, it was a very enjoyable solo game: that man Grant clearly knows how to balance a scenario!

Figures by Baccus 6mm. Buildings by Leven Miniatures, from a batch of stuff picked up at the Joy of Six this year.
Posted by JWH at 12:27