This morning I had a go at re-fighting the Battle of the Gebora, a Peninsular War battle which took place between a French Army commanded by Marshal Soult and Marshal Mortier and a Spanish Army under the command of General Mendizabal.  I used the scenario first published in Miniature Wargames 333, published Jan 2011. 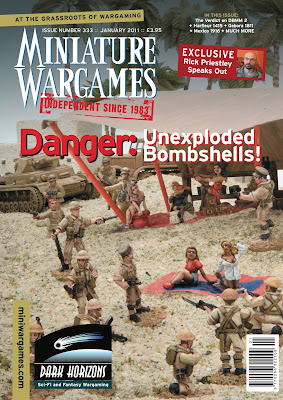 The scenario gives all the details necessary for a refight of the battle.  It has a clear, straightforward map (with a map scale thankfully!) and simple orders of battle.  I then supplemented this scenario with a few details, particularly concerning troop quality, to this scenario and refight of Gebora using the General de Brigade rules.

And here is a link to Oman's description of the battle.


Results:
A decisive French victory, just as occurred in the real battle.  However, the Spanish really did nearly pull off an unlikely victory by unleashing the charge down the hill against the French infantry.  The Allied cavalry was marginally more effective than in the historical prototype, although this only meant that some units charged home before being defeated, rather than routing without much of a fight.

Game Notes:
A very interesting game - more interesting than I had perhaps guessed.  This game brought home quite a few points to me about scenario design and effects calibration.
The MW scenario did (very usefully) rate the commanders, but didn't rate the troops directly, so I used the ratings from the General de Brigade scenario, converted to Polemos.  However, Polemos uses fewer classes than General de Brigade, but relatively the differences are stronger.  Also in Polemos, slopes are considered very important (the same effect size as artillery support).  Steep slopes are even worse for an attacker.  So whereas in the original battle, the French infantry could engage in a protracted firefight to weaken the Spanish, here the French were too vulnerable and the Spanish duly attacked successfully.  The French were literally 1 dice 'pip' away from a possible defeat at one point.  I imagine that in many current rules, certainly in rules I have played in the past, the odds would have been less in favour of the Spanish at this point.  Conversely, cavalry in Polemos are brittle.  The cavalry engagement came out reasonably similar to that of history, but cavalry must either surprise infantry or wait until they are disordered to charge successfully.  The French light cavalry were quite lucky that their charge came off in this refight.
If I do this one again, I may experiment by making the French infantry veteran.  Certainly, this would make the infantry fight more equal (essentially compensating for the slope, to some degree).  The mechanics would also allow more granularity in troop quality, if required.  As written, the basic factors in the rules are:
+2 for Veteran
-2 for Raw

So a veteran unit has a base 4-point advantage when attacking a raw unit, and 2-points when attacking a trained unit.  This is quite a significant level of modifier when the basic mechanic is an opposed D6 roll.