The Battle of Brunanburh 937AD - A DBA Refight

Guy Halsall was clearly on a roll, as he wrote another cracking scenario in Miniature Wargames 28, covering the Battle of Brunanburh.  Described as the greatest battle in Anglo-Saxon Britain before Hastings, it featured a Norse-Scots-Welsh alliance against the unified English kingdom of Athelstan. 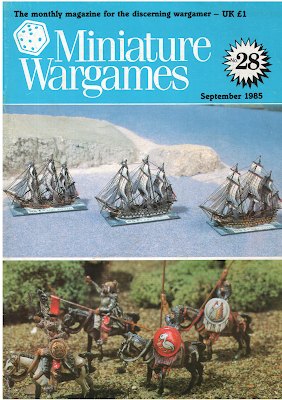 To do the battle some sort of justice, I used (broadly) the rules for Big Battle DBA, and the following two armies.

To reflect the Allied quick attack, the first two moves would be given to the Allies before the English Army could react.

Game Notes: An interesting game, although hardly one of great tactical moves.  However, the decision to plough straight in was bold in its way, I suppose!  More seriously, the Allies were blessed with some good luck and stronger troops.  The advantages of the Viking "blade" troops are already well-known in DBA - the Anglo-Saxon spearmen will do well to beat them; but the Scots' pikemen - even if fast pikemen - are pretty strong when given rear support; again, the Anglo-Saxons will do well to stop them.  A rear supported pike unit against a spearmen shieldwall uphill is an even match unless the pikes are outflanked.  What happened was that the intial pike shock disrupted the line sufficiently that many of the spear elements could no longer claim flank support, so the advantage swung definitively to the Scots' pikemen.  Given that the Scots did have that extra bit of luck, the Anglo-Saxon troops were in for a thin time.  Even when they gained an advantage, they struggled to translate that into destruction results, rather than mere recoils.  The fighting against the vikings was much more even, although it did take some good DBA minor tactics to keep the Anglo-Saxons going for as long as they did.

Rules used were DBA v3.  Figures were from Baccus 6mm, buildings mainly from Timecast, I think.  The play area was roughly 4'x4' on a home made game mat.