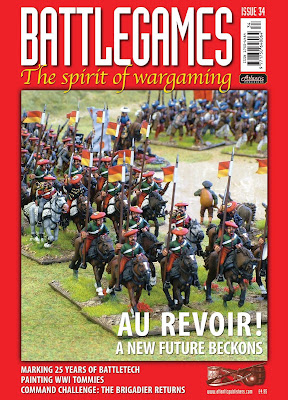 Back in the final issue of the late, lamented Battlegames (issue 34), the editor Henry Hyde published a campaign scenario.  I've always itched to give it a go but when it came out I was busy with my refight of the Peninsular War and I felt that having two horse-and-musket campaigns on the go would be a bit much! However,  the planets have finally aligned and this week I commenced the campaign...

I have set my version of the campaign during the Napoleonic Wars.  France and Austria at war in 1809 on several fronts, have both sent small armies to occupy and secure the German Principality of Martinstaadt, either for annexation or for positional advantage in the post-conflict peace talks.  This, and economic considerations, and the effect on neutral opinion of this violation of the neutrality of a small state, will put a firm limit on the length of operations: 16 weeks, beginning on May 1st.

The Austrian Army has several units of Hanoverian allies contained within the divisions.

The French can draw supplies from road leading south to a maximum distance of 8 hexes (the French magazines are about 10miles back from the border).

The above approximately follows the forces given in the scenario.  However, to spice things up, I decided that the small Army of Martinstaadt would also play a role!  It is dispersed in peace-time garrisons as follows:

For the first week, there will be no response: the attack came as too much of a surprise.  Furthermore, there are elements within the military that support one side or the other and wish Martinstaadt to take sides. Therefore when either side enters a town, roll for each unit:

If the enemy is present, the unit will disperse for a week and then form up at the nearest friendly location.

All sides can form Corps groupings - one of the divisional commanders present will assume the leadership and one of his staff will take over the division in battle if the C-in-C is absent.


The Rules: Although there are some very good campaign rules published in Battlegames 9, I used the Polemos Napoleonic campaign rules since they are very solo friendly and tie in with the tactical rules I use. They are probably a step less involved and simpler than the Battlegames rules too (incidentally, much the same campaign rules are in The Wargames Compendium).  Although not precisely the same, you can look at the very similar Polemos Franco-Prussian campaign rules here.

The initial moves and first clashes to follow soon!
Posted by JWH at 01:56