I had my first full play through of THW Games Design's Two Hour Dungeon Crawl tonight and I thoroughly enjoyed myself!  It is a very quick but challenging distillation of dungeon crawl rules.  It is based on familiar THW concepts - so lots of discrete simple tables to generate opposition and their reactions - but they are soon assimilitaed and game play becomes very quick indeed.  I imagine that one could get very proficient at these rules and the game would really rocket along. 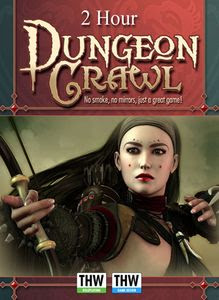 As with all THW games that I am aware of, the most important mechanic is a test against the Reputation of the character (whether player or game controlled) to generate a number of successes.  The absolute or relative number of successes (depending on the situation) then determines what happens next.  It is quite a quick and bloody game: the dungeon I got through tonight would have taken my RPG group about 6 hours of play back in the 80s!  But make no mistake, this is not an easy game to win - there are many quick ways to die!  It is however a very easy game to play.
There are some pretty good and crucially quick systems for generating missions, opponents, magic items and loot and so forth; but the game architecture is so open that you could easily include or alter most of it to make the game you want.  There is no background 'fluff' as such, but there are plenty of stats for the archetypical fantasy races.  If you want to play with figures, this makes it easy to use whatever you happen to have; it is however perfectly possible to play it with pencils and paper only.  For this test, I used some miniatures and tiles for the combats, but designed and went through the dungeon on paper.

So, how did my mission go?

I had a party of 5 (all humans): a Rep 5 Knight/Caster (i.e. Mage); a Rep 4 Thief, a Rep 4 Soldier, A Rep 4 Soldier/Shooter (i.e. Archer) and a Rep 3 Knight/Caster.   That last one was an unusual combination of dice rolling.  My mission was to get rid of a big, bad Orc chieftain, who very unusually specialized in archery!  An Orcish Robin Hood figure, perhaps...anyway, my thief was killed by a trap, my soldier fell into a deep abyss and my soldier/shooter was killed in a fight; only the two knights escaping with lives, treasure and the head of the Orc...there were numerous interludes along the way - secret rooms found and explored, minions fought, a group of Elves enountered and pleasantries exchanged!

So a very encouraging start with these rules. The way threats are generated can be very deadly, which keeps the challenge level high, but the rules are simple enough to be grasped quite easily - a very important thing for the solo player who is playing one side and administering the other.


Just a few pictures, to give a little taster: