Okay, well, technically these are second and third thoughts since I have messed about with these a little before, but these are my first considered thoughts... 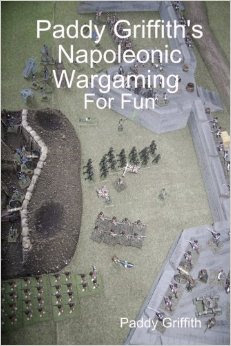 Paddy Griffith's Napoleonic Wargaming for Fun contains many different sets of rules for tackling different aspects of Napoleonic warfare: 1:1 skirmish gaming (see a game here), a divisonal-level game, an army-level game, a campaign game, a siege game and a TEWT game.  As well as this, that rarest of things, a game designed for the player to be a brigade commander.  I'm not sure that I know of any other rules designed to be played with a handful of battalions and maybe a cavalry squadron or two.  The one perhaps closest, Scott Bowden's Chef de Bataillon, focuses on a single battalion in detail. Back in the 80s, one wise member of my club at the time felt that Newbury's Napoleonic rules were okay if you limited the forces to a strong brigade a side. One could do worse than use the Charles' Grant Napoleonic rules.  But I digress...

I set up a small scenario (on a terrain modified from Clontarf, of all things...) to test them out.  Three B-class Austrian battalions would take on two B-class French battalions occupying a hill. The aim of the game wasn't to use clever tactics or anything, just to go through the mechanics for each side.

I was using my 6mm Baccus Napoleonics which are based on 60mm x 30mm bases.  The rules are really designed for one base to be a half company (a section) but I thought that would be a bit cumbersome so I used battalions of four bases, so one base roughly represented a company.  The ground scale used 5cm = 10m.


Game Notes: Well that was very interesting.  I found it a fascinating exercise, playing at a level I have rarely gamed at, or seen gamed. The rules were pretty easy to follow, although not always perfectly organized (rules in one section seemed to fall better in other sections) and with a nasty typo in the firing chart.  However, easy enough to overcome this.  The basic mechanisms were great, with a tight focus on command (orders from brigadier to battalion commanders) and keeping units in order.  Disorder happens very easily (firing and changing formation causes disorder) and there are plenty of opportunities for units to become partly shaken.  This made for a game both playable and engrossing.
However, I have serious problems with some of the calibration of these rules, enough for me to wonder how much playtesting was done of the final versions.  Some things seemlike oversights: there is a reasonable chance of a draw in close combat, but no rules as to what should then happen, for instance.  But the biggest problem I have with the rules currently is this: B Class troops (so regular troops of all nations) have a roughly 20% chance per sub-unit of failing a morale check; the chance of rallying is 10% per turn.  Sub-units adjacent to the shaken sub-unit must then test for morale themselves.  Unless I am miscalculating something, then that makes it more likely that a unit will become entirely shaken once one sub-unit is than that the unit will rally!  I feel I must be missing or misinterpreting something but I'm not sure what...
Anyway, a fascinating game and highly recommended, but be prepared to do some mild tweaking to make it into a fully formed game.  In some ways, that comment might do for many things about wargaming that Paddy Griffith wrote!
One potential issue is that there aren't many published scenarios for this level of battle to my knowledge.  Some of the tabletop teasers series will be suitable, but otherwise some adaptation and thought might be needed (not bad things, obviously!)
Posted by JWH at 14:21