Situation: After being defeated in his attempts to gain the capital city Martinstadt from the Austrians, General Prost was faced with a significant strategic choice.  Should he gather his forces for a third attack on the city?  Attempt an attack on a different axis?  Attempt an outflanking movement?  Or concentrate his forces defensively and cede the initiative to the Austrians?  Being a true child of the revoultion, Prost immediately ruled out a passive defence but doubted his ability in the short-term to succeed in a renewed attack on the capital.  Thus, he decided upon a small flanking attack to threaten the Austrians line-of -communications.  Not wishing to waste time re-deploying his main army, he directed his reserve, consisting of the Imperial Guard division and the reserve artillery to march North and attack the town of Iferbrucke, ungarrisoned towards the Austrian rear and supply lines.
Prince Lauda immediately and sent his own nearest units - his Grenadier Division and his Cuirassier Division, moving rapidly backwards, as soon as another division could arrive and take responsibility for the siege train. 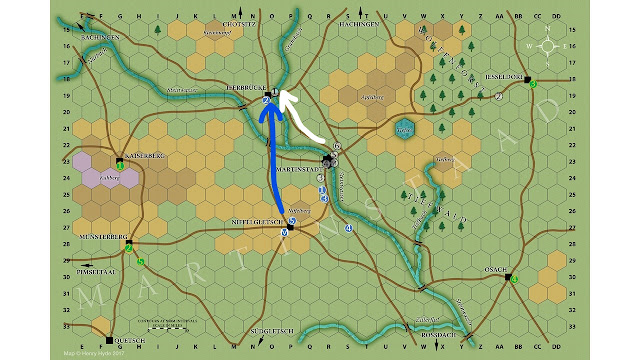 Fortunately for the Austrians, their troops (who started later but had a shorter distance to go) reached the town first and were able to set up to defend it from the advancing French...

(n.b. Those really paying attention will note that the Austrian Reserve Division commander has assumed command of the force, and thus his own formation has been broken into its component brigades;  similarly the French Artillery general has taken command of the French force)

The French move was imaginative and could have led to far-reaching results; luckily for the Austrians they were just able to counter it in time.  The opening moves of the battle were very good for the French and it appeared that they might be able to force an Austrian retreat.  But the combination of the cavalry charge and the stern resistance of the two Austrian Grenadier Bns defending the second farmhouse ended up in the French right giving way and without significant reserves at this point, Gen Laffite had no real choice but to call off the action.  Strategically the French have at least succeeded in giving the Austrians something to think about but without reinforcements neither side is likely to make much progress here.

Depending upon a rules interpretation, fighting withdrawals can either be relatively easy or hard in Polemos.  Withdrawing in a line facing the enemy is painfully slow and thus favours the attacker, who can normally get enough infantry in position to mount an attack at a place of their choosing.  However, you can retreat by using "reform" moves of 2BW a turn, which are slightly but not prohibitively more expensive in terms of order points (i.e. PIPs), and this effectively represents breaking ranks or retreating in loose order and then reforming.  I sway about which is the more realistic!  I think that the ruleset's author, Chris Grice, prefers a slight modification the rule at the moment, which says that he prefers that at least one base in a given group must remain static during a reform move.  In this case, the best tactic for breaking contact is to do it by alternating battalions (i.e. units in the same brigade or division reform on each other alternately; it takes a little more organizing and a few more TPs but achieves a similar effect).

Figures as ever by Baccus 6mm, most of the buildings by Total Battle Miniatures.
Posted by JWH at 09:52