This is another Romans vs Gauls scenario, again from Miniature Wargames 91: 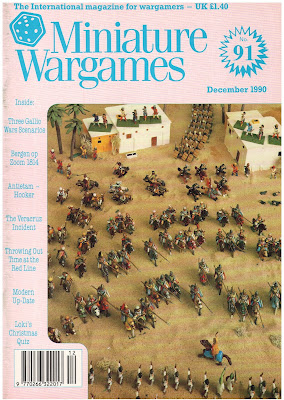 This was the second scenario from a set of three.  The re-fights of the first scenario are here and here. The scenario in the magazine is essentially an attack on a Gallic hill-fort by the Romans with large Gallic reinforcements arriving to defeat the Romans.  The scenario calls for sending messengers out and then the reinforcements turning up after due delay.  I didn't think that the scenario was that realistic at this scale, so mentally I changed the scenario.  The local Roman commander has gained intelligence that the Gauls are planning to raise a large army to destroy the Romans in this region and has also discovered the location of the assembly point.  Hoping to destroy the forces already there before the other contingents, he sets out with his forces to destroy the fort before the other tribes turn up to concentrate.

The perimeter of the Hill Fort I counted as a Defence Value 2 obstacle, the interior is DV1.

The Gallic player brings to roll for the first set of reinforcements from turn 8 onwards, the second set from turn 13 onwards, in both cases needing a '0' on a D10 for the forces to arrive.


Game Notes:
A very good scenario this - both sides were in with a sniff of victory until the end.  Although I modified the "fluff" of the scenario, I didn't modify the actual mechanics of the scenario.  It was too bad for the Gauls that their other set of reinforcements didn't turn up!

The Polemos SPQR set gave a pretty good game.  I still do a few minor things wrong with this ruleset, although I think that I am getting to the bottom of it now.  Areas of error: some bits in how groups work and in how recoiling works.  The Gauls are a lot more fierce in this game than in Wargaming: An Introduction, I have noticed!  This is a function of how the charge rules work.  A Gaulish base has a slightly better than 50:50 chance of being able to charge its opponent successfully.  A successful charge brings with it a +2 modifier.  As attacking Gauls will normally be at a basic +1 against Legionaries anyway (same close combat modifier, but +1 for being "unshaken unformed" in the first phase of combat), this amounts to a hefty +3 modifier.  Going with par, that means that the Gauls will be following up the Romans (+1) and the Romans will be shaken (+1).  So it is very touch and go for the Romans whether they will manage to beat the Gauls off.  I make no comment about how realistic this is, but it does mean that the Romans have to be very careful...

I will go into this in detail in later posts, but during this game I had my second moment of basic insight into what my (slight) problem with Polemos SPQR is.  I asked myself what I wanted from this ruleset.  I know what I want from DBA - it says so in the introduction page: the simplest quickest game that still gives some of the flavour and decision-making involved in ancient and medieval gaming.  In my opinion, DBA does what it sets out to do very well, removing almost all marginality at the sacrifice of some flavour both in terms of the mechanics and in terms of army differences.  I know what I want from Neil Thomas' rules: the simplicity of an "old-school" wargame with much more streamlined mechanics and IMHO, it delivers this in spades, despite some missing mechanical detail and a slightly caricatured approach to the armies.  What I want from Polemos is to be like DBA, but with more of the period flavour and nuance.  I think it achieves this, but it loses too much of the design elegance in the process.  One basic way to look at this is to compare dice rolling.  In DBA, the player has to roll dice for basically two things:

In Wargaming:An Introduction, the player has to roll for three things:
1 - Hitting in combat
2 - Saving rolls in combat
3 - Morale as a result of combat

In Polemos: SPQR, the player has to roll for:
1 - Tempo points (i.e. Command points)
2 - To charge the enemy
3 - Combat
4 - To rally individual bases
5 - To cross terrain (in some cases - more on this in some of the upcoming battle reports)
6 - Army morale

In addition, each of these elements is more complicated in SPQR than in the other two.  A morale test in W:AI is a single roll against one number which never changes - a rally test in SPQR is a modified opposed roll, which is modified both by circumstances (i.e. a table of factors and potentially by command effort).  Every shaken base has to roll to be rallied every turn.  There are also two types of shaken (one as a result of difficult terrain, the other from combat).   It is more complicated than its stable mate Polemos Napoleonics, because the latter effectively uses the tempo roll to provide the randomization for 2, 4 and 5 of the steps above rather than rolling for each of them individually.  Plus, its formation morale system is simpler too.

Now, I don't want to overplay this - I like and enjoy Polemos: SPQR and I think it does a better job than the other two in reflecting the reality of first century BC combat as I understand it.  But those improvements come at a noticeable cost.