And in the last in my current series of Romans vs Celts scenarios, it has to be Mons Graupius.  I had a look at the scenarios in Miniature Wargames 84: 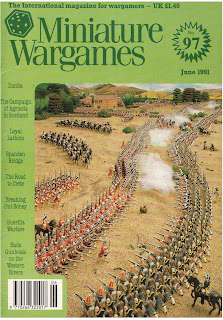 It was a good edition of the magazine (the article "In Search of the Realistic Wargame" by Jason Monaghan was great, with a good ECW scenario and an interesting looking Cold War mini-campaign) but the article on Mons Graupius was the kind of historical overview article which was more interesting in the days before the Internet: it wasn't really a scenario, as such.  There was a much better article in MW97, which does give a full scenario: 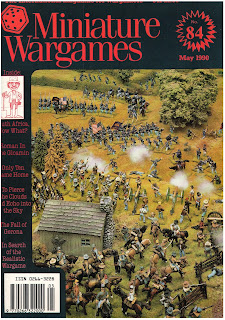 The only minor criticism I would have about this scenario is that it advises having very large forces of model soldiers, which is great, but I wonder how many rulesets around in the 80s could have dealt with having 650+ Caledonian warriors on the table...

Anyway, I used the scenario from the Polemos SPQR rulebook, in the end:


Game Notes:
A tight run thing, but just going to the Romans - there wasn't much in it however.  A charge by a deep block of tribal foot is really difficult to stop in Polemos: SPQR - only the Romans superior training allowed them to prevail by enough to stop, push back and then break the attacking tribesmen.  It poses a difficult question: just how effective should the charge of tribal foot be?  And how important should armour be?  As a matter of fact, does anyone know on how many occasions Western European tribal foot swept away legionaries in the open?  Anyway, this is how the odds stack up:

The tribal foot will lose at most -1 to being overlapped and given even numbers that suggests they will get at least +1 for having the extra rank i.e. cancel out this advantage.  All this gives excellent odds that they will achieve a shaken result, which is the real lever into victory.  Only much superior Roman skill can mitigate this.

I do wonder about a couple of the modifiers in these rules.  For instance, being "Armoured" is mainly considered an advantage in charging - it isn't considered a bonus in actual close combat.  But the most prevalent armoured troops are Roman foot, who are considered rubbish at charging in these rules!  Similarly, I do wonder about giving Tribal Foot (for instance) a bonus in attacking whilst testing to charge, in close combat when attacking, plus the additional charging modifier.  I wonder if the same phenomenon is being rewarded 3 times with the overall result that it is much more effective in the game than in real life.

Anyway, it is a superb little scenario this -highly recommended.  The game was very tense up to the end.  I did slightly mess up some of the rules to do with shaken bases and recoils, but I have cleared them by speaking to the author, David Heading, on the Polemos Yahoo! group.  I don't think anything I did wrong made a crucial difference here.  The reason for the mistakes were that some of the way shaken works is slightly different to other rules in the Polemos stable.

Figures by Baccus 6mm and Rapier miniatures.
Posted by JWH at 18:08