Wargaming: An Introduction - Battle of Bibracte

And as is becoming traditional, after two plays of the scenario using the Polemos SPQR rules (here and here), I again bring you the Neil Thomas' Wargaming: An Introduction version! 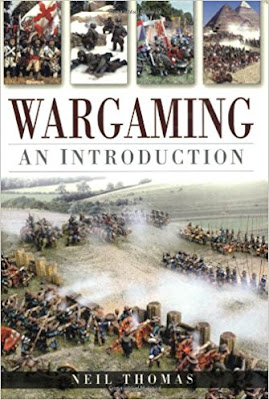 The scenario remains as previously:

Another good game, although simpler as befits these simpler rules.  I still don't really see how a warband army can win in the open against legionaries with these rules: this is especially true because Neil Thomas consistently minimizes the effects of flank attacks, unless the opponent is pinned to the front.  I suppose it is broadly consistent with his generally attritionist approach, although I strongly disagree myself - I think that historically flank attacks are powerful things which rarely failed once they had been pressed home.  That isn't to say they are a bad tactic in Neil Thomas' rules, but what happens is that they still have to work in an attritionist way.  This disadvantages the tactically inferior side, since they can't use a flank attack to suddenly change the tactical situation.

As I drew attention to in the previous battle report, the overall look is quite different, since the simple all-out assault by the Helvetii is possible in these rules in a way which is pretty impossible in the SPQR rules.  Although much good it did them in the end!