Polemos SPQR: Battle of the Sambre

This scenario is taken from the version of the Battle of the Sambre from Phil Sabin's Lost Battles but using the Polemos SPQR rules - as suggested in the comments section on a recent post!  It helpfully limits all its scenarios to c.20 units, which makes them perfect for small-ish Polemos battles.  Obviously it makes a nonsense of the specified base:troop rations specified in the Polemos rules, but the designer thinks that shouldn't be much of an issue!  More of this later... 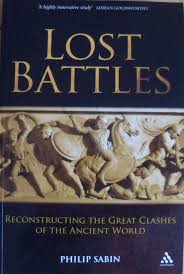 The Battle of the Sambre is a river crossing by advancing Gauls against light screening Roman forces, whilst the legionaries rush to reinforce.

The legionaries enter at a rate of 4 bases per turn, on every turn after the first.  Labienus may enter with any group of legionaries.


Game Notes:
A good game, which showed some of Polemos SPQR's best and worst points.  Unlike in many games, the best formation isn't a line: non-drilled forces in particular need to be in blocks.  I actually used the exact deployment in this first game, so some of the forces weren't in particularly efficient arrangements - this really hampered the Belgae, as it stopped them launching a coordinated attack on the Romans, as it took a while to get everyone moving.  It also means that it is very undesirable to stop the bigger groups in case it takes a while to get them moving again.  The sum total of this is that, quite realistically, the tribal forces work better if the plan is simpler.

One slightly amusing part of the SPQR rules is that bases need to roll a D6 when crossing a stream and a '6' indicates that the base fails to cross: I have christened this the "crocodile test".  Anyway, the Belgae seemed particularly afflicted by the curse of the crocodiles in this one, which further delayed and disrupted the attack.  More seriously, a combination of the deployment and the crocodiles mean that the Legionaries hit the tribal foot whilst they were still working their way past the stream and up the hill.

I won't repeat previous comments about the relative merits of legionaries and Gallic warriors.  Instead, I will talk about the "swing effect" in the Polemos SPQR rules.  That +2 for charging, plus the fact that quite often troop types have an extra pip advantage when attacking, can add up to quite a bonus.  So although Caesar was taking a bit of a risk in leading his charge, it really was almost a certain thing, especially if the defending base is already shaken.  This is a massive, massive difference to Wargaming: An Introduction, where troop type is the major determinant of success and terrain makes a relatively marginal difference.  That charge swing also means that aggression is a prerequisite - and the legionaries are disadvantaged by being so rubbish at charging.  Unlike in other Polemos rules, there are no negative effects for not charging, but the opportunity cost for failure is quite high.

Instinctively, I am quite opposed to (radically) changing figure:man or base:man ratios, since I feel that centuries, cohorts, vexillations and legions did fight differently - combat is not fractal in that sense, even ignoring the range/ground scale issues.  That said, I tend to think of it is a lesser issue in ancient gaming than it would be in more recent times.  I'll look forward to seeing in detail how Lost Battles itself deals with the issue in future.  The scenarios all look great!

Otherwise, same comments as before - a good accurate with game with some fiddly bits in a couple of the mechanics.