Still scratching the itch that seeing lots of Jacobite Rebellions stuff on the Wargaming for Grown Ups blog recently created, The simple rules for the '45 in Wargames Illustrated 134 contained three scenarios: this is the second one, the Battle of Falkirk.  The real battle was a Jacobite victory, although not very decisive.  With that in mind, this scenario is tilted in the Jacobites' favour, although not quite to the same extent that the previous scenario (Prestonpans) was. 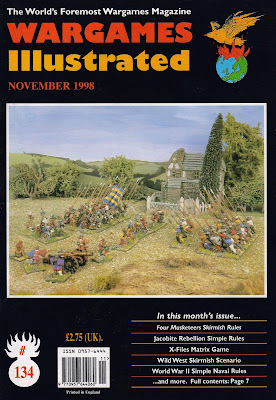 The battlefield contained a ravine and an area of boggy ground which was impassable in any kind of formation.  As befitting the simplicity of the rules, they are both simply forbidden to both sides.


Game Notes:
A good, quick but fun and more interesting than the Prestonpans scenario, partly because it isn't (quite) as one-sided, partly simply because there are more units on each side, leading to more interesting interactions and possbilities.  Again, the model, although simple, worked convincingly.  It didn't quite follow history, but it wasn't too far off.  Mechanically, poor units break after one failed morale check, whereas other units must fail two.  This seems to replicate the fragility of many of the Government's regiments simply but effectively.  The morale test is well calibrated to produce believable results, but no "sure things".  They encourage all the different troop types to act believably without being prescriptive.  The main problem with the rules are that they are just that bit too short, not covering those things which give rules bulk but do need to be incorporated: arcs of fire, moving by wheeling (or not), moving backwards, firing into melee (or not) - I don't think any of this sort of stuff is covered.  As a solo player, I can rule on these things to please myself, but it might be more of a problem for head-to-head games.  What I think is absolutely needed is an army break point, to stop armies fighting to the last man.  I used the venerable "withdraw once more than 50% of units have routed", which seems reasonably close to reality.
I think that this is a game that could work in a school or college quite well, if one wanted to demonstrate how the battles of the '45 were fought.
Figures are again by Baccus (from the C17 and the Napoleonic ranges) on a 2'x2' table.  The game took about 30 minutes (including set-up and photography time).