As I was in the North East anyway, today I headed over to Gateshead to visit the Border Reiver show.  First impressions were that it was an okay venue (a sports hall of some kind but thankfully well lit - a few years back it was in a very dingy orange-lit hall) but it was quite quiet.  There were five demonstration games and three participation games with a reasonable smattering of traders.  For a small show, my primary interest of 6mm was quite well served, with Irregular and Scotia both present.  There were a few sellers of very nice looking MDF buildings, there was lots of Warlord stuff, Pendraken, Aintsy Castings, Reiver, some traders selling Frostgrave and Perry box sets and so on, some sellers of  Games Workshop-type things and a small but brisk bring-and-buy area.  So a reasonable selection (full details here).  Unusually for the shows I am used to, there weren't any book sellers there. 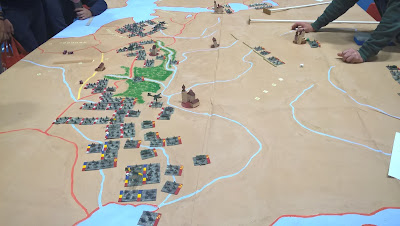 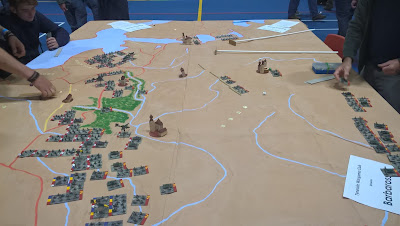 The map-cloth was nicely functional, as were the wooden buildings representing the major cities (Kiev, Moscow etc.).   I think that the figures and vehicles were Pendraken or similar, but I forgot to ask.  They looked nice anyway, with each baase representing maybe a Corps or similar.  The rules were the club's own I think, and basically resembled a simple boardgame CRT: each side roll a D6, add some factors, a 3:1 or better result destroys the enemy and better than 1:1 pushes them back (or something along those lines anyway).  It seemed to rattle on at a fair pace and was decent inspiration for how a small group of gamers might actually put on a game like this: it was a very "doable" game.

The Contemptible Little Wargames Club did the attack of D'Erlon's Corps at Waterloo: 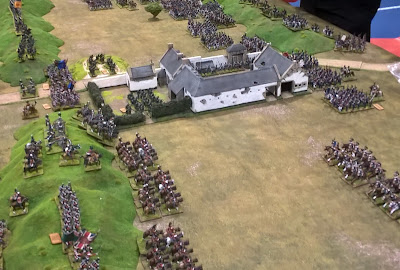 Nearly every show I go to has a game like this: a big set-piece Napoleonic game using lots of nicely painted 28mm figures and the Black Powder ruleset, and nothing wrong with that either.  I liked the actual figures, the model of La Haye Sainte and the trees although the "whole", although it is perfectly fine, isn't really my thing (I prefer to use 6mm stuff on a smaller board but with more depth and width relative to the figures).  But this was a nicely done version of a show-staple and Black Powder remains an effective ruleset for this type of big multi-player game. 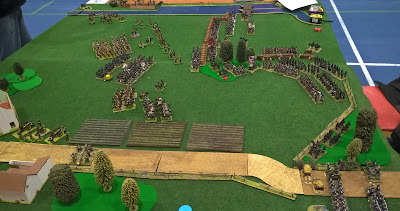 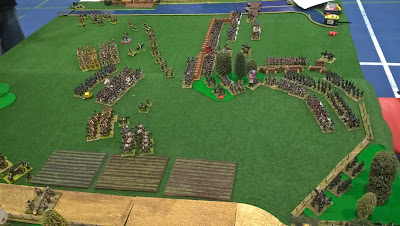 This was a very simple set-up to play out quite an interesting "what-if" scenario: what if Marshal Soult had attacked the British units isolated by the collapse of the pontoon bridge during the build up to the Battle of Toulouse (1814)?  Again, some nice-looking 28mm figures using the Black Powder rules.  The terrain was more "I could do this at my club / in my garage myself" inspiration rather than a "this is the kind of thing that lots of skill and dedication can achieve" inspiration.  I know that both approaches have their fans! 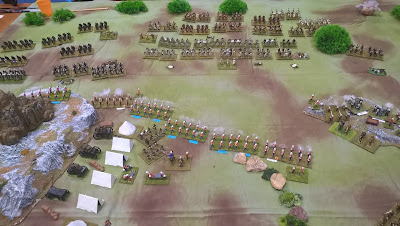 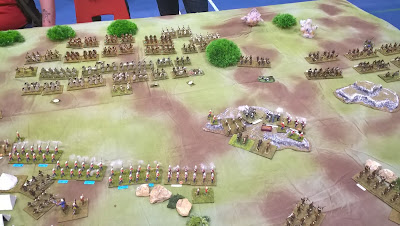 Another 28mm game this one, with simple but nice terrain used effectively.  The guys were very friendly and helpful in explaining the rules and the set-up.  Another game that used the club's own rules, they explained that they used the same outline for all the periods they play up to the C20 and then adjust for weapons and tactics (which when you think about it is not so different from the WRG/DBx or the Black Powder/Pike & Shotte family of rules, amongst others) and this enables them to play quite big battles in 2-3 hours with rules that are almost entirely internalized, leading to more concentration on the tactics.  They use quite "old school" approaches in some ways, with measuring sticks (bounce sticks still appear when necessary!) and written orders, yet some of the guts of the rules were quite modern and streamlined (they use combat values for units/bases).   Perhaps the mixture is unsurprising in a club which counts the writer of Practical Wargaming as a member... One great tip they passed on was to have players write orders for the first five moves which had to be followed verbatim and then start the "active" part of the game.  That seems like a really good way of creating interesting situations from pre-battle procedure.

They also had some nice Zulu Wars stuff to look at and touch: assegais, helmets, a Martini-Henry rifle and bayonet and a cavalry carbine.

There was a Ghost Archipelago pirate game: 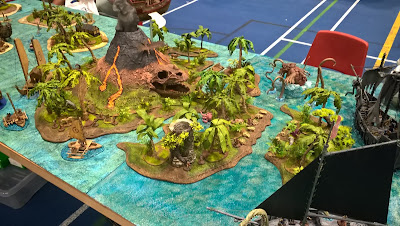 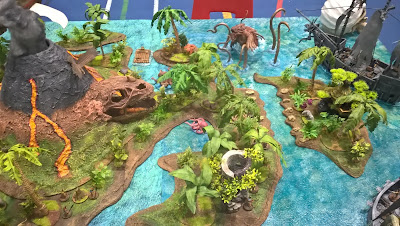 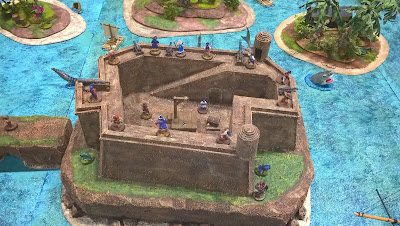 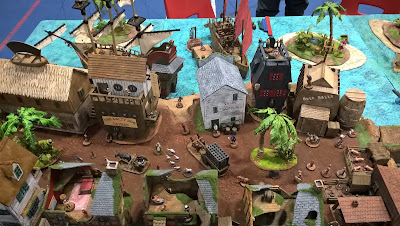 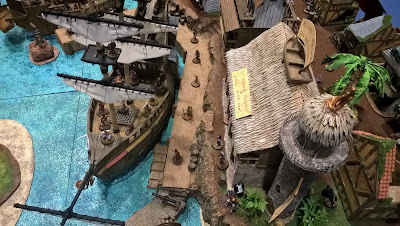 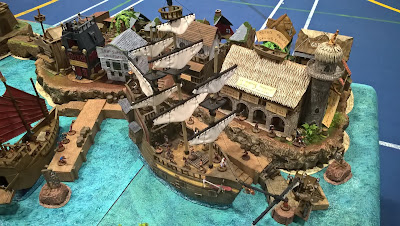 There was lots of really nice terrain, figures and ships on display here.  The pirate port was genuinely spectacular!  The eagle-eyed will have spotted it is heavily based on that in the cartoon film Pirates! In An Adventure With Scientists!


I think the point of it was more the set-up than the game but it was good to chat with the guys who kindly explained some of the finer points of the design, which was obviously a labour of love and really did look the part.

There was a WW1 aerial combat demonstration game: 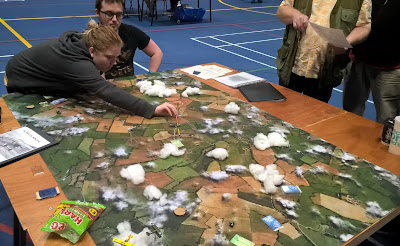 This looked like a Wings of War heartbreaker/hack but good fun for all that and it seemed to be reasonably busy for the few hours I was there.

There was a also a re-enactor / medieval european martial arts instructor who was showing off some C13 style armour and weapons and taking people through the finer points of construction and usage.  It was very interesting and the website is worth checking out too.  Apparently they do re-enactments for English Heritage and suchlike in the Northeast (they are at Warkworth next year in May IIRC) and they actually teach people to use the kit in the style of Hans Talhoffer.

I got some bits and pieces from Irregular: a few bits missing from my late C15/early C16 forces (mounted arquebusiers and some sword-and-buckler men, and a a wagon with a standard on it); plus some samples from their Vietnam range to see how I get on with painting up their modern stuff.  I also picked up some quite nicely painted Warhammer 40k stuff at very reasonable prices (as presents for some younger relatives) and a few Border Reivers, just because I fancied painting a few, and which will fit in well to my occasional fantasy games.  The guy at Scotia was explaining that they had acquired the old ArmiesArmy 15mm stuff and were just starting to re-release it: I will probably get a few of the infantry and vehicles at some point when they are all out...

So it was nice enough and everyone I talked to was friendly and helpful but the whole affair just felt a little small.  The size of the hall could easily have fitted in twice the number of games and a few more traders and most of all, some more visitors.  I can still remember the North East's wargames community packing out the Civic Centre in the late 80s, which is much larger and pretty close to the centre of Newcastle.  Has interest in figure gaming died out to that extent?