For my next play test of Bob Cordery's Portable Air Wargame, from his Developing the Portable Wargame, (the last one is here), I again used a scenario from the Achtung! Spitfire boardgame (and the map and the counters). 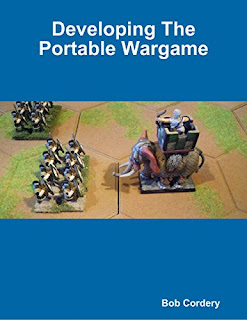 This secnario took place on 12th May 1940 and featured the first air-to-air combat kills of legendary Luftwaffe pilot, Adolf Galland.  In the scenario, Galland and his wingman have bounced a formation of six Belgian Hurricanes.

Both 109s start with 3 energy points to reflect their greater starting speed and altitude.  The Belgians were surprised and must simply move forward on their first go.  The Germans choose whether to move first or second.

As a "getting back into it" game, there was only one additional rule that I was trying out here: an "Immelman".  Aircraft can reverse facing if they move forward for half their speed (rounded up) first.  They cannot fire during or at the end of this move.


Game Notes: A fun, quick game which reminds me how much I like the simplicity of Bob's game: it is quick enough to retain the feel of a fast dogfight.  Or bounce, in this case.  The basic mechanics are still intuitive enough to memorize and just play.  The Immelmann change seemed to work okay too.  The stat advantage to the 109 seems justified.