I posted these in slightly the wrong order, as this and the next mission (both the same scenario) were done before Galland's First Kills.  This mission is based on the outward leg of the (in)famous attack on the bridges over the Albert Canal in Belgium on 12 May 1940, again using Bob Cordery's air wargame rules from his Developing the Portable Wargame. 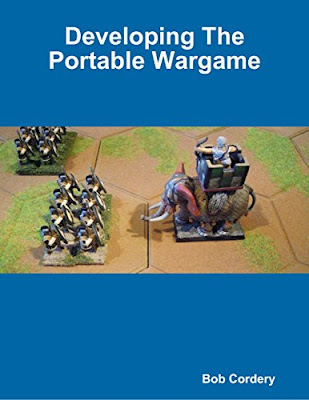 The Hurricane start off with 4 energy chits each, the 109s each have 5.

The only rules change I was trying out in this game was limiting energy chit expenditure to a maximum of 3 per turn.

Game Notes: Another good fun game and showed that the rules can handle a reasonable number of aircraft at  time (14) without slowing down the game.  The main issue that occurred to me during this game was the rules for deflection shooting, or lack thereof.  If shooting at high closing speeds from any angle is just as easy as sitting on a target's six, then reasonably accurate air tactics will never happen.  So my tentative solution to this was to say that shots at the front quarters of any aircraft will only hit on a '6', rather than a '5-6'.
I also started to think a little about damage, although I didn't resolve the issue at this stage.  The problem is that if an aircraft has a sufficiently high damage (here meaning "above 4") then a fighter cannot shoot that aircraft down in one turn.  Now, I do not consider this a problem in the original rules because in the scale of that game, aircraft probably represent a "unit" of aircraft rather than a single aircraft and I have no problem with the idea that a large group of bomber aircraft must be attacked at least twice to be eliminated as a useful tactical force.  This obviously does not apply to games when one is thinking about the aircraft as an individual machine, which I am doing.