Miniature Wargames 19 contained an absolutely cracking scenario by Arthur Harman to re-create Wellington's defeat of Soult and his crossing of the Douro on 12th May 1809.  The scenario is mainly designed for a multi-player club recreation of the events, although a two-player alternative is given.  I actually vaguely remember playing this one down the club in the mid-1980s!  Anyway, solo play can't necessarily deal well with the same themes - a lot of the scenario is a pre- and post-battle mini campaign.  But the actual battle scenario is interesting enough, and the main events don't necessarily require much in the way of figures or table size. 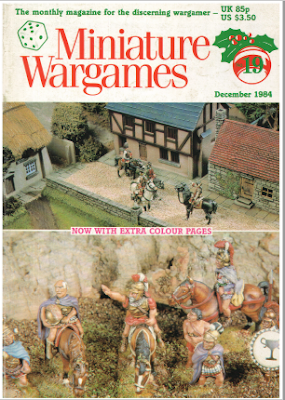 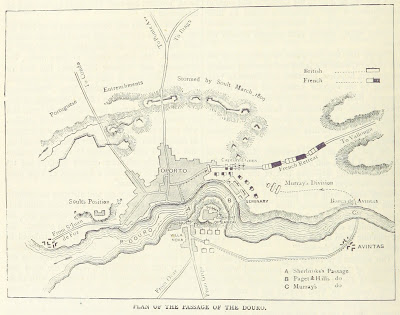 I chose to being the refight at the moment the French prepare to attack the British troops that have secretly managed to ferry themselves over to the east of Oporto and occupied a seminary.  The French must destroy this bridgehead before Wellington can bring the mass of his troops over.  Unfortunately for Marshal Soult, he has already sent away his strongest infantry division and his cavalry brigade to escort his baggage away (he tried to turn them back into the battle but was unsuccessful).  He therefore had to resist with two strong infantry brigades and an artillery battery, but if he leaves Oporto undefended, perhaps the Allied forces will be able to cross into the city as well, in spite of the bridge having been destroyed.  Wellington has three divisions, a cavalry brigade and six artillery batteries, but can only slowly feed his troops across by ferry.

n.b. If you are wondering why the number of bases is different from the battalion strength of the various forces, it is because Polemos uses elements of equal strength, so the strength of the force is considered across the entire Army depicted.

Terrain:
The Seminary and Convent have a DV of 2.  The river is impassable except by boats.  It takes 2 turns to get 1 base across by boat.  The boat in Oporto becomes active if the French garrison is reduced to less than 2 bases. Ideally the river you use will be wider than mine (this river is big).


The Result:
A British victory, and perhaps a more substantial one than in the historical action, but that was a direct result of the French fighting with greater skill and ferocity than on the day, supported well by an outstandingly handled single French battery.  However, the increased ferocity led to the greater French casualties and more pertinently, Soult's Corps would have been split had this been the case in reality - which might have had ever more dire strategic consequences (at least one part of the Corps would have likely been captured outright).

Game Notes:
An interesting and intense game, helped by the fact that in this battle, the French are generally speaking a touch tougher than their Allied opponents - I don't think this would be an inaccurate reflection of the skill and experience of the two forces at this time.  The French dilemma is where to draw the balance between preparing a co-ordinated attack and allowing too much time for Hill to get most of his division across.
The French also benefited from attacking downhill towards the seminary.  This effectively negated the defensive value of the seminary (the factors are +2 in each case)!  I think this has made up my mind: the combat factor for uphill should be +1, not +2 and the factor for veteran troops should be +1, not +2.  I note that in the big-battle version of the rules General de Division, Veteran troops are +1.  To my mind, the lower level the game, in general the smaller the differentiation between troops should be.  Why?  Maths, really.  If Prussian battalions are +1, then why should a regiment also be +1? It should be more like +2.  Apart from that though, no quibbles and the rules gave a really good game - as did the scenario, a real cracker, especially if you could do it in such a way as to get in the pre- and post-game stuff down at the club, or via an e-opponent or whatever.  Definitely one to scout out a copy, if ou can.

I used a 5'x3' table, but actually a 3'x3' would have been absolutely fine: you are only going to need a couple of hundred yards east of the Seminary I think, especially if you ignore the baggage train and its escorts.  Similarly, some or all of Oporto can be left "off-table", and merely bring in British troops across if the French garrison abandons it.

Figures as every by Baccus 6mm, boats by Irregular, buildings by Timecast, Total Battle Miniatures and Leven (I think).