I fancied a small, easy Napoleonic action to get me back into the swing of playing Polemos General de Division.  I decided to use Dave Brown's Salamanca scenario, featuring the fight of Ferrey's Division to hold off the advancing allies after the battle was pretty much lost.  It was published back in Battlegames 12.  If you would like to read what really happened, look here. 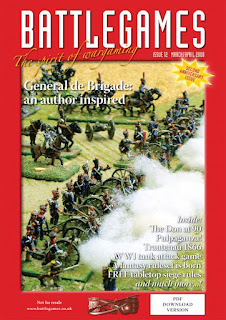 Dave Brown later wrote an article in Battlegames 23 about how much he dislikes rulesets like Polemos for being over-simple.  However, it is a very good small scenario and this is heretical gaming after all and here we positively delight in such things...

Dave Brown gives excellent orders of battle for his General de Brigade rules in the article.  However, these rules use units with different strengths and separate skirmisher units, so we must use something slightly different for Polemos, as we take into account strength across the force and reduce or augment the number of bases if one side or other has weaker units numerically.  My compromise here is:

The "second-line" rating is taken from General de Brigade.  I would suggest keeping this rating by making them the same as "Raw" troops in General de Division but only using a -1 modifire instead of -2, where this is applicable (the combat results table, in other words).  Otherwise teat them as trained or raw, to taste. I'd ignore the special scenario rules in the published article, not because they are bad ideas, but because the Polemos rules incorporate the ideas anyway.


Game Notes:
A quick, fun scenarion but one with plenty of interest.  Polemos makes attacking uphill relatively difficult, but also proposes a relatively large advantage for Veteran over Raw troops.  So the key to this battle was the effectiveness of the British artillery in hurting the French infantry on the right, which enabled the Fusiliers to successfully attack the weaker French units.  This pressure enable the British to apply pressure to pin the French units to the front and thus achieve success on the other flank too.

I felt that the "second-line" rules worked very well and I am going to incorporate them further.  I am also thinking of reducing the "Veteran" advantage to a maximum of +1 too.

This scenario was played over a 4'x3' board, using Baccus 6mm figures.  Rules used were Polemos General de Division.