Miniature Wargames 17 contained a scenario for the little known battle during the War of the Three Kingdoms/English Civil War which took place at the village of Cotes which lies near Loughborough in Leicestershire. 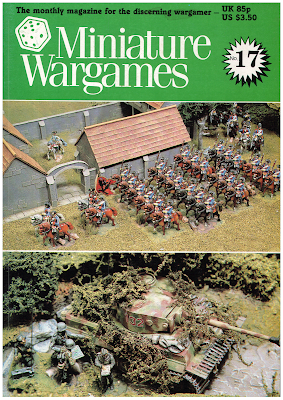 The battle represents a Parliamentary attempt to take a bridge over the River Soar, in order to delay the junction of approaching Royalist armies.  Happily, although naturally you will have to get hold of a copy of the magazine to read the exact article, the author also wrote about the battle for the "Leicestershire Historian" journal if you would like more details.  If you would like to look at the area, look here on Google Maps.  The main area of the battlefield appears to have changed little, although Loughborough has grown since.

The orders of battle in the scenario are as follows:

The River Soar is considered impassable.  The Royalist earthwork/barricade doesn't have any effect on firing, but has a Defence Value of 1 in Close Combat.  It also counts as an obstacle to cavalry.


The Result:
The Royalists fought rather harder than in the real battle, but ended up suffering a worse defeat.  However, it is unlikely that Hartopp would feel able to hold onto the position given the time it took (two-and-a-half hours of game time) and his losses and would have to retreat as the Royalist main forces approached.

Game Notes:
An interesting little scenario that can be played with relatively small forces on a small battlefield (4'x3' here) but with enough variety to make it a good battle for learning the rules.  The Polemos ECW rules make it (realistically) difficult to control forces outside of the commander's eye, which explains the tardiness of Thornhaugh's flanking movement and its failure to charge (in game terms, he simply never had the tempo points to achieve the big advance at then end).

One noticeable divergence from reality is that the artillery and musketry in real-life seem to have been much more effective than in the recreation. The chances of achieving anything with muskets are pretty small. I think the thing to do here is to rule that the Royalist infantry are either Raw or "Mixed" (i.e. 1:1 muskets:pikes) so that the Parliamentary foot and artillery have more chance of achieving a better result than a "halt" in the exchange of fire.
I think that it may be more realistic if Foot cannot follow-up recoiling enemy.  This would allow defeated infantry to escape.  As it is, the only time it is not worth following-up is if the Foot are needed to defend a strong point.
Dutch-school Horse continues to prove its worth in control terms.  The tendency of the Royalist Horse to become wildly disorganized in pursuit is very noticeable (and led directly to defeat here).
The Horse seem to me to maybe have a slightly too easy time of it against foot they outnumber in bases (if not in men).  Imagine a brigade of Horse of three bases (375 troopers) against a singe base of Foot (500 soldiers); if the Horse advances to contact, it will be immediately on a +3 in the subsequent close combat (+1 for advancing into combat, +1 for overlapping both flanks).  Does this seem generous to the horsemen?
Incidentally, I played this battle more aggressively than I would normally have been inclined to in order to get a result. If I had been playing this in a campaign, I can imagine a gentle stand-off after about 12 moves of not very much happening...
Figures from Baccus 6mm, buildings from Timecast.