Victory in War in the Pacific...Hurrah!

Well, it took me more time to play the computer game than it did for the real war to play out, but I have finally managed to finish/win a game of Gary Grigsby's monster game War in the Pacific: 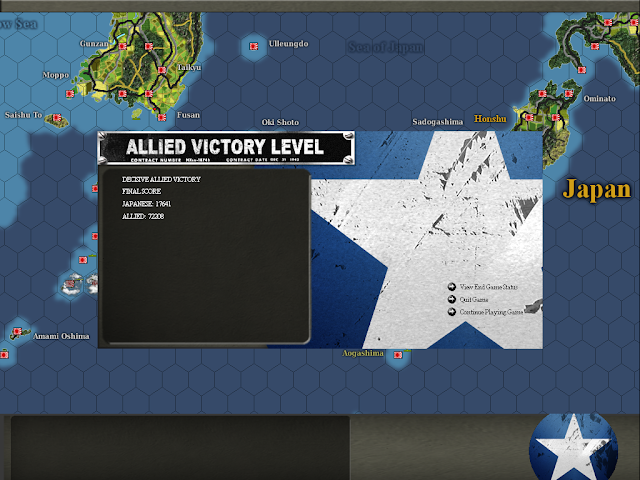 It took me five years of very on and off playing, but I have stuck with it.  As it happens (playing the Allies), I didn't get anywhere very near Japan, but I did manage to sweep the Japanese from mainland Asia and re-take all the islands up to the Marshall Islands in the Pacific.  When Port Arthur fell to the Chinese and Singapore fell to the British, the Japanese AI folded.

I'm not sure that I'll ever play it again.  Perhaps when I retire!  But I prefer more focused games now, which put the player at an actual level of command.  The detail is vast, absolutely vast.  A fair bit can be automated, but I don't find the automation that intuitive or effective in many instances, which therefore means lots of things have to be micro-managed.

Email ThisBlogThis!Share to TwitterShare to FacebookShare to Pinterest
Labels: PC Game, War in the Pacific