To get back into the swing of gaming after the recent hiatus, I set-up a Polemos General de Division game.  The scenario was a version of the Battle of Haslach-Jungingen adapted from a scenario first published in Miniature Wargames Issue 338: 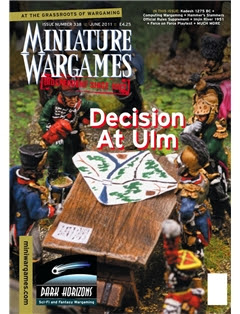 I believe that Miniature Wargames' digital subscribers can get access to the edition online if you don't have a hard copy.

Adapted for Polemos GdD, the forces involved were:

As Polemos uses 1 base = 1 battalion, the order of battle given above doesn't exactly reflect the numbers of battalions actually present.  Here, the strong French Bns have been given a couple of extra bases, the Austrians have lost a couple.

THE OUTCOME:
Although the Austrians lost far more men than the French in this encounter, they did manage to inflict just enough casualties on the French to give themselves a chance and aided by a little luck, were victorious.  The key moments were Werneck's division surviving two brigade morale rolls (each with a 33% chance of failure) whereas Rouyer' brigade failed its morale check (again, 33% chance of failure).  However, whereas the loss of Werneck's division would not have been fatal to the Austrians, the loss of a single brigade was fatal to the French: there is a "50% rule" in General de Division which means that when half the brigades of a division are spent, then the whole division becomes so...so Marchand's brigade was hors de combat too even though it had never been in any danger from the Austrians, whose attacks they had beaten off with ease.  It is debateable whether Dupont chose the right option, but it isn't certain he didn't.  Not attacking would have conceded to Mack the right to prepare further assaults of the kind which cost the French their artillery and the French infantry was so superior that it was probably a risk worth taking.  I feel that Mack's strategy - the reverse of the historical one - was the correct one.  He needed luck to win, but he needed to create the circumstances which would allow him to have some luck.  Getting drawn into an attack on Jungingen would probably have been no more successful than it was on the day.

GAME NOTES:
A very enjoyable game - perhaps surprisingly so.  The infantry modifiers against the Austrians here are fearsome, varying from a basic +3/+4 against upto +6!  On an opposed D6 roll!!  The only way to partially mitigate this is to use quite tight, solid formations to try and get as many flanking and supporting bonuses as possible...and hope for one or two bits of luck and exploit them.  And this is how the game panned out.  In most of the infantry combats, the Austrians were hammered but by using enough attacks, there was bound to be a couple which defied the odds.  And so it proved!  However, I do feel that the bonuses for being veteran and penalties for being raw may be too extreme in Polemos GdD.  A four-point swing (+2 for veterans, -2 for raw) seems just too big,
Artillery is relatively much easier to attack in GdD, because it is hard to get the same number of defensive bonuses, so if you can isolate the artillery from its supports, it is almost always worth ago.  It is the one set of rules which actually encourages you to keep your artillery at a bit of a distance, whereas most seem to actually encourage you to move it really close to get into canister range,
Yet again, the brigade morale roll is key to GdD and proved the difference between success and failure.  I think it reflects the morale of subordinate generals as much as that of the men in the units involved.
The game was played out on a 4'x3' board.  The figures are all from Baccus 6mm Napoloenics and the buildings are mainly from Total Battle Miniatures.