General Situation: The French have continued their remorseless pursuit of the British and Spanish armies into Portugal.  The Spanish Armies of Andalusia and Valencia have not yet recovered from their losses in the previous battle and in the movement westwards after this.  There has been little time to stop and no opportunity to forage and their weary troops have not been able to outdistance the French, whose Marshals, scenting the decisive victory, have driven the Imperial soldiery on unsparingly, thousands have fallen out of the ranks but these men are not Marshals of France for nothing and they have caught the Spaniards near the small hamlet of Zereira.  The Spanish commanders, Castanos and Cervellon have pleaded for Wellington to retrace his steps and help them before they are overwhelmed.  He has replied that he will do everything within his power to assistance them, but the miles are long.  Can the Spanish hold out against the Imperial forces for long enough for Wellington to bring them his aid...and maybe inflict a decisive defeat on the invaders instead?

The French have managed to concentrate four Army Corps (III, IV, V and VI) against the Spanish, and General Suchet (newly-promoted and appointed as Marchand's replacement as the commander of I Corps) is marching with all speed to reinforce his brother Marshals... 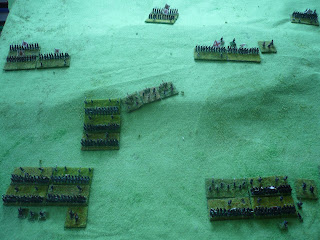 The Assault on the Right


Destruction of Coupigny's Division and Triumph of the French Right

Outcome: The French lost around 3900 men and 24 guns in this encounter, but the Spanish suffered far more heavily, losing just over 7000 men and 12 guns.  In addition, the losses leading up to the encounter were horrendous as both sides ignored supply considerations, the Spanish desperately attempting to evade and the French in their determination to catch them.  More than 4000 fell out of the Spanish ranks during the marches, then another 8000 were caught in skirmishes, deserted or capitulated just before the battle.  More than 7000 Frenchmen (and Germans) died or were hospitalized in the pursuit.  Both Spanish armies are now utterly exhausted and without a period of rest, they must surrender.  This is likely to mean that Wellington must turn and fight one more battle, this time against a superior French Army, otherwise the remains of the Spanish armies must fall into French hands. But dare he risk such a battle against the odds?

Postscript: (from the correspondence of General Castanos)

General Wellesley,
I regret to inform you that today, in the absence of our esteemed allies, the English, we were forced to battle a much superior force and despite holding our own for a period of over three hours, in which time we inflicted serious losses upon our mutual enemies, we were not able to prevail, nor able to maintain our positions, in the absence of your anticipated help.
My soldiers are famished, exhausted and defeated and without your aid we must starve, die or surrender.  It will truly be said in days to come, that the old Spanish Army stood and died for its King, its land and people on these hills outside Zereira.  The help of our allies did not arrive in time to save the cause of Spain today, let us hope that we do not have to expend twice the quantity of blood of our countrymen to achieve the victory of freedom in the future.

Game Notes:  There were quite a few points of interest in this game, and in the lead up to it.  This is the first occassion where caution over supply has been thrown to the winds by both sides on a large scale in the campaign so far and the results in these rules (from the Tomb For An Empire boardgame) were not pretty.  In addition, this is the first time that a mainly shattered army (the Army of Valencia) has been forced into battle, at which point it automatically loses a third of its strength!
In order to march to the guns, commanders in the adjacent area must pass an initiative test.  Both Wellington and Suchet were successful here.  Then, starting on game turn two, each side rolls to arrive, needing a '6'.  Suchet arrived after 4o minutes, Wellington never arrived at all!  I am reasonably happy with this mechanism, removing certainty and there are shades of this in several Peninsular battles: Baylen, Talavera, Vimiero, Vitoria, Tudela, to name a few examples off the top of my head.
The game was played on a 5'x3' dining room table and took a couple of hours of gaming to complete. It took slightly longer than normal for a 12-turn came because there were effectively seven (!) independent commanders present.  The French C-in-C, King Joseph, was absent and there is no Spanish C-in-C superior to Cervellon and Castanos.  In game terms, this means a slightly wilder pattern of tempo bids and distribution than normal, although it didn't have a massive effect, except perhaps Mortier's Corps took a while to get going after it stalled when he was injured.
As ever, figures are from Baccus 6mm and the rules used were Polemos Napoleonics.  Anyone who has seen one of my write-ups before may have noticed that I tried using skirmisher figures rather than brightly-coloured tiddly-winks as shaken and tempo point markers.  I think it did make the game look rather better.