Some Thoughts on Neil Thomas' "Simplicity in Practice" Rules

I have just returned after a month away doing some very urgent and unexpected work far away from home, hence the lack of recent postings.  I am pretty tired now but I hope to be feeling better soon and resume a little bit of gaming.  I did manage to read Phil Sabin's magisterial book on wargames' design Simulating War.  Although Sabin's practical examples are all manual wargames, much of the discussion is relevant to any historical wargames.  More of this in a later post, perhaps.

What I have been thinking about is Neil Thomas' "Simplicity in Practice" rules from Battlegames 23. 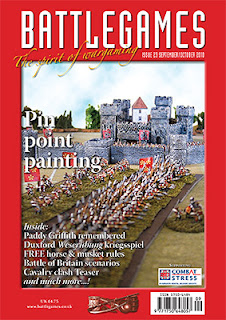 In may ways, I love these rules.  They are very simple and easy to play with readily comprehensible and memorable mechanics.  They can probably be memorized in less time than it takes to memorize the rules of chess.  They are specifically designed to be used to play out Charles Grant-style Tabletop Teasers or similar scenarios, as in his Scenarios for All Ages .  So, a quick review:

These rules are designed to be used for small horse-and-musket armies on small tables, typically a unit will have a 6cm - 8cm frontage and be used on a 3' x 2' or 4' x 3' or similar table.  Any number or size of figures can be used as long as this kind of frontage is kept to (and with a very little bit of work done to distances and ranges, you could use it with any number of figures or bases in a unit).  This is basically the same proportions as in Old School Wargaming but with radically less figures overall, whilst still keeping the same proportions between unit frontages and table sizes.  All of the typical horse-and-musket unit types are represented in simple fashion (there is no heavy or horse artillery, for example, just plain artillery).   The units seem to represent battalions, regiments and batteries, although there is nothing explicit to say this. Equally, no explicit ground scale, figure ratios or time scales are given, although I would suggest that the frontage of a unit is approximately that of a battalion, so with 6cm bases, 1cm = 15m - 25m and a turn 3 - 5 minutes of time.

Movement is pretty simple with deductions for wheeling (as in many of Thomas' rules, actually a pivot from the centre to prevent the practical difficulties involved in wheeling) and difficult terrain.   Formation changes are eschewed entirely with movement rates on roads outside of combat neatly getting rid of the need to show columns of march and so on. The firing mechanism is based on most units rolling four dice to see if they score 'hits', potentially a second die roll, which is a saving roll for cover and a final dice roll to convert those hits into DPs (demoralisation points - units are effective until they reach 4DPs when they collapse).  Melee is based on each side rolling four dice and comparing scores.  Units with situational advantages add extra dice.  There is no morale system outside the combat system.  There is no explicit command and control mechanic within the rules, but players are advised to use the written orders system employed by Charles Grant.  There are some rules suggestions given for smaller-size units (e.g. an independent company or squadron) and for elite/levy units.

So far, so good.  The rules are very playable.  But I do have some issues with the rules, which can be split into two parts.  The first has been identified in a few previous reviews.  You can see the slightly wonky maths in the review of the rules here
However, I have a greater problem with the rules.  Although Neil Thomas' comments make clear that the loss of 1 DP is not equivalent to losing 25% of the unit's strength - which is why as in DBx units remain at full combat effectiveness (melee partially excepted) until destroyed - the use of cumulative DP loss as the destruction mechanic does make combat attritional rather than based on shock action.  This is in common with all his rules.  More importantly, I just cannot agree with his close combat modifiers, in which an attack on the rear/flank is worth exactly the same as having more units in the area, or the advantage which dragoon units have against light cavalry.  To my mind, marginally greater "complexity" - and here I just mean not rewarding all tactical factors with exactly the same bonus - will produce a much better game.  I also think that creating a beautifully simple set of rules and then encumbering them with written orders seems a pity.  However,  all of these things are very easy to modify and/or ignore.  The review linked to above makes good suggestions for how to simplify firing and make melee more chancy.

Overall, a very highly recommended set of rules for gamers wanting quick, fun games on small tables keeping to the spirit of "Old-School" rules but with some nice modern touches to simplify and speed processes.  They are very suitable for beginners as the rules are very simple and the prose very clear.  In fact, I would suggest that they are one of the best rulesets ever written for novices.  I think that more experienced gamers will want to tinker with the structure to provide a little more period detail for their games.  There is quite an active yahoo group here where some people have already provided some ideas for modifications (including modifications for other periods).

More to come as I consider some revisions to these rules.
Posted by JWH at 09:38