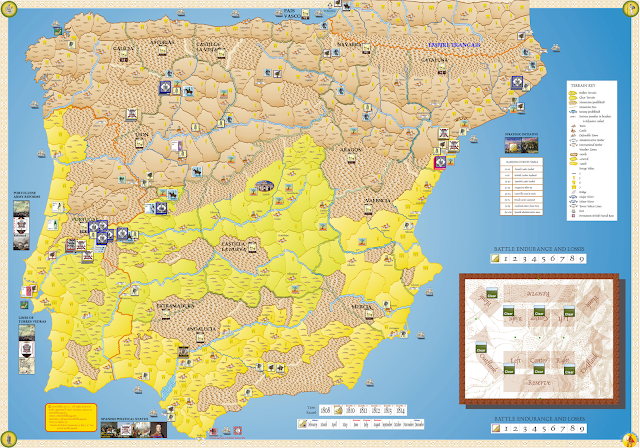 The French Army of Spain has continued to pursue Wellington and the Spanish armies of Castanos and Cervellon towards Portugal.  A hard fought battle near Coria has seen the Spanish weakened at the hands of Marshals Mortier and Moncey.  The redcoats and the white coats are not far now from Abrantes,  The Poles of the Vistula Legion have succeeded in their blockade of Salamanca, which is now in French hands.

In the Northwest, Soult's II Corps has finally taken Astorga without any interference from the Spanish Army of Galicia.  The French must decide whether to use II Corps to pacify the Northwest or to add it to the forces pursuing Wellington.

In Catalonia and Aragon, General Junot has continued his pursuit of the wretched of Army of Catalonia, which has been reduced to the strength of a mere brigade.  It is cowering in the fortress of Tortosa, succoured by Cuesta's Army of the Centre which has saved it for the time being.  However, St Cyr's VII Corps has begun the blockade of Hostalrich and once that is taken, he will have the freedom to move on towards Tarragona and Tortosa.

Spain is still building up its strategic reserve around Seville.

Quite a lot of Spain has been devastated by the constant movement of the armies and this is increasing the attrition suffered by the rival forces.  The Army of Spain, II Corps, the Army of Valencia and the Army of Andalusia have all suffered extensively because of this.