The Right:
5 bases of Raw Infantry (M) in two brigades

The Centre:
14 bases of Veteran Horse (S) in two brigades
1 base of Raw Dragoons
1 base of Artillery

The Left:
6 bases of Raw Infantry (M) in two brigades

Cavalry:
8 bases of Trained Horse (D) in two brigades
1 base of Trained Dragoons

I also gave the Royal Army two Poor generals, each controlling one of the infantry wings.

This scenario was re-themed from the Battle of Coutras scenario in Minature Wargames 008: 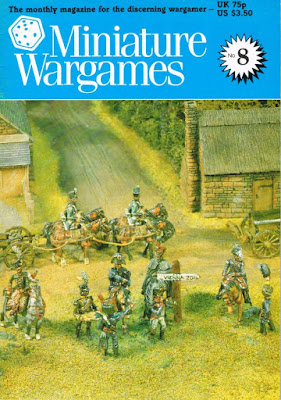 The forces were faithfully ported across, with the closest reflection of troop types and ratings possible, with the French Catholics becoming the Royalists and the French Huguenots becoming the Parliamentarians (it seemed most appropriate this way round!).

The Flank Attacks:
The initial period was dominated by this Royalist attempt to attack and turn one or both of the Parliamentary flanks.


Game Notes:
An enjoyable enough game, although I badly messed up the scenario's translation into the ECW period, which made the game far too one-sided (in reality, this had been a crushing Huguenot victory).  There were three main drivers for this:
1.  The original scenario rated the French Catholic horse as 'A Class' and the French Huguenot horse as 'B Class'.  However, the rules reflected a tactical superiority of the Hugeunot horse over the Catholic 'lancers'.  In the Polemos ECW rules, the Royalist cavalry generally have a tactical superiority over their Parliamentarian rivals.  Thus in this game the Royalist cavalry was simply too strong for anything the Parliamentarians had.
2.  Because the Royalist Army was 27-bases strong overall, I gave the Royalists a couple of sub-commanders.  This however made the Royalist infantry too capable of recovering and re-attacking the Parliamentary shot on the flanks until they got lucky.
3.  The scenario suggested that the Royalists should get a -1 on all dice throws to simulate the effect of their long night march before the battle.  I am slightly sceptical of such things in general and didn't implement it but looking back on how the game went, I think this may have been a mistake!
In addition, I probably deployed the Huguenot lines of horse too close together (which meant that the rear line was swept away in the rout of the first - support lines in this game probably need to be 2BW back for horse.