A Surfeit of Spaniards, or "Where The Hell Did They All Come From?!"

I have recently moved my gaming things into a different room in the house prior to a new arrival in a few months time.  Moving boxes of toy soldiers from their old surroundings into their new homes  has meant that I have had the opportunity to glance anew at what I actually have.  I was setting up a French-Spanish Peninsular War clash today when it occurred to me that I seemed to have quite a few Napoleonic Spanish.  So after I had finished the game, I decided to hold a little "parade" to see what I had: the results shocked me somewhat! 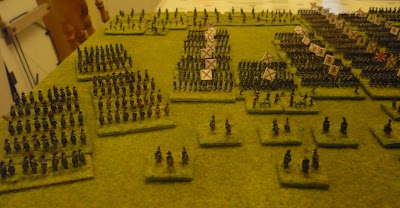 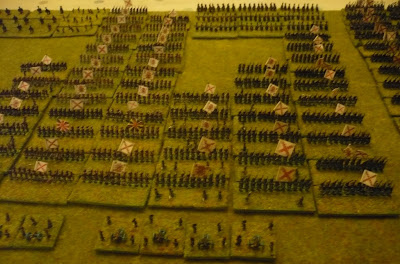 The order of battle is as follows:

That is about 2600 foot figures and 250 mounted figures

These figures are all from Baccus 6mm, mainly from the Napoleonic Spanish range with additions from the British and French ranges.

Now the question is: what on earth am I going to do with all of this stuff?  I will never get more than half of it on a table at one time as an absolute maximum.

One option is to re-paint some of the late war infantry as Prussian reserve infantry from 1813.  Another option is to re-base and re-paint some of them for more traditional games, with individual bases as companies for typical column / line / square-type rules, such as Black Powder, Neil Thomas' Napoleonic Wargaming, General de Brigade or whatever.  It is a very first-world problem for sure, but it would be good to find a better use for some of these figures, otherwise I fear they will remain stuck in their video boxes for the foreseeable future.