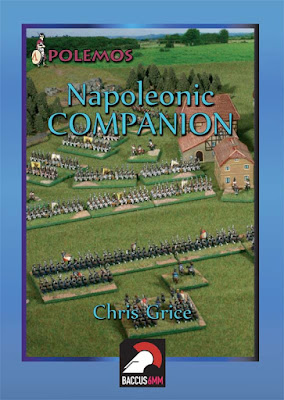 Game Notes:
A solid French victory over the Prussians.  The game was okay, but I didn't think that the Prussians really had that much chance.  The basic reason for this is the calibration of the modifiers in Polemos General de Division.  So...

Thus raw Prussian infantry (Landwehr and Reserve infantry) is in for a thin time attacking trained French infantry uphill.  The French, on an opposed D6 roll, are likely to be at least +5 up...The Prussians don't have any artillery capable of bombarding the French either.  So all in all, a pretty difficult task!  The only way to marginally reduce the French advantage is to attack with a line of infantry with a line of cavalry behind.  However, doing this is very hungry for tempo points, hard to coordinate and has to be "advertised" so heavily that it is pretty unlikely to work either.
Interestingly, the modifiers in the companion set "Marechal d'Empire" are much flatter: a "+2" in GdD is likely to be a "+1" in MdE.  This reduces greatly the number of "sure thing" attacks.  In addition, the +1 modifier for attacking in MdE enocurages boldness, whereas taking those risks in GdD is likely to get a force wiped out quite quickly.
I'd be interested in knowing people's views about the modifiers in GdD: are they too extreme?  How much of an advantage do people think that things like experience levels and being uphill should matter?

The game took 70 minutes, played on a home-made mat on a 5'x3' table.  Figures were mainly from Baccus 6mm, with a base from Commission Figurines (the Prussian regular infantry).  Buildings from Total Battle Miniatures. Rules used were Polemos General de Division: 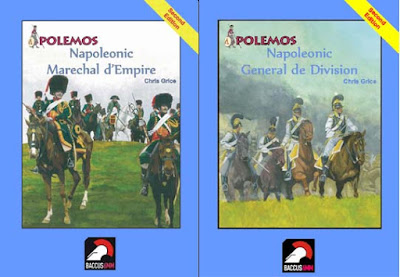 And I must make some unobtrusive shaken markers!!
Posted by JWH at 09:10