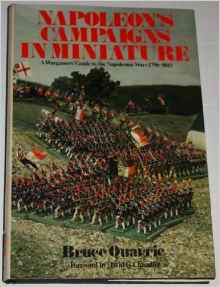 Napoleon'sCampaigns in Miniature by Bruce Quarrie was subtitled "A Wargamers' Guide to the Napoleonic Wars 1796 - 1815" and was designed to give a wargamer all the information needed to replay battles and campaigns set in the Napoleonic period. It really does try and give information on everything. There is a potted history of the wars, with a little extra detail on some of the more famous battles (with very good maps). There is a discussion of which size figures to use, which figure: man ratio to use, how to paint and base figures, and so on. There is a brief introduction to the organization of the units belonging to the various armies, with particular emphasis on the most common units in the biggest armies of the period. It all looks okay as a (very) basic introduction. There is a slightly more detailed guide to logistics and the medical services and attrition and sieges and so on, to enable these aspects of Napoleonic warfare to be incorporated into campaigns. Although the explanations can be lengthy - prices for pairs of shoes and loaves of bread, my goodness! - Quarrie typically resolves it all into a single figure for cost or a single formula for working out attrition or returned PoWs or whatever.
There is a quite lengthy chapter on the generals of the period, who are then rated in four categories: orders (how quickly the general reacts to/issues new orders; control (how well the general keeps units doing what he wants them to do); attack morale and defence morale. I had trouble with this, not because of my disagreements with the ratings (although I do, in many cases) but partly because I struggle to see how one could arrive at them, partly because I think they are badly miscalibrated and partly because I don't think that the explanation of exactly how to use them is very clear. This is exacerbated by a scaling issue with the game. The rules are designed for "divisional-level" actions with 10 - 20 units per side (or possibly, per player). However, the campaign rules and the potted battle histories indicate that the author intends them to be used for big battles, but for these battles to be "bath-tubbed" i.e. a notional regiment to represent a brigade or division and so on. It isn't clear in these cases how commanders should be represented. Should each brigade have one? Or each division? Or only the C-in-C.
There are chapters on firepower and tactics which (loosely) give the author's thinking on these subjects and indicates the broad approach the rules will take. They also serve as a useful introduction to the weapons and tactics of the period for a newcomer.  Quarrie does indicate that there are "gaps in the knowledge" of how to square the effectiveness of the weapons under test conditions with battlefield results.
There is a chapter on how to set-up a campaign. It is all okay, with reasonably simple rules (although there is a good deal of record keeping to do). I felt that the lack of a lengthy, detailed play example was a big omission here.
The book also contains a full set of tactical Napoleonic rules. The units represented are battalions, regiments and batteries. The rules require written orders and movemement and combat is calculated simultaneously. All troops are rated in several different areas: firing ability, melée ability (both charging and not), morale level, discipline, movement. There are a number of marginal differences between troop types between nations - the so-called "national characteristics", so Italian infantrymen in the Austrian army move distinctly more slowly than those in the Italian Army itself, for example. In many situations, the turn has to be broken down into fractions when calculating attacks and formation changes and so on. Casualties from fire and melée are given in numbers of men rather than figures. Combat seems quite bloody, artillery in particular is pretty devastating. There are a lot of factors incorporated in combat calculations, as there are for testing morale and discipline. This makes the rules play somewhat slow. The rules aren't that long though, as they are quite tersely written, in comparison to some more modern sets.  All of this was fairly typical of rules written at the time, although I think this set may have been the first published to use "national characteristics" in this way.
I do think that the actual playing of the rules isn't particularly well-explained however, especially as multi-unit attacks can end up having complicated cross-effects on each other. Again, worked examples would have really helped. I don't think of this as a modern phenomenon: Charge! 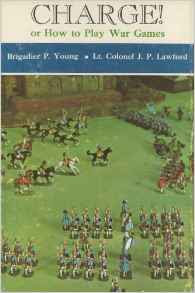 was full of such things (and made understanding the rules really simple). On an historical note, I am very suspicious of rules which state that squares couldn't move and that line infantrymen couldn't skirmish, despite lots of examples to the contrary for both.
So how does this book look from 40 years on? It is well-written and engaging. It does cover the basics of gaming, although other books, like Henry Hyde's Wargaming Compendium 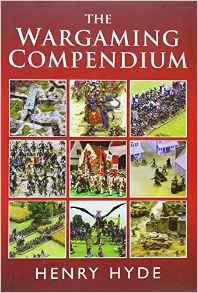 does this kind of thing much better. The rules are very clunky and very questionable in many ways. If an author is going to a "detailed" set of rules that includes lots of processes, then the rules will be less good the more they depart from history. As a lot of that history isn't particularly well understood, detailed rules for combat casualties and morale create a lot of hostages to fortune. Although I am too young to remember most of the following directly (and am thus very happy to be corrected) I think that their main interest is historical: I think that these rules were the inspiration of computer-moderated rules like Eaglebearer 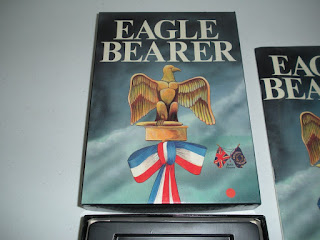 and Carnage and Glory, which attempt to make a better game from somewhat similar assumptions and aims by using the calculating power of a computer to manage what in Quarrie's day had to be done manually.  Possibly Empire 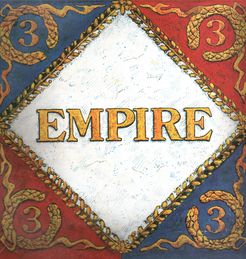 was the last published manual evolution of Quarrie's thinking. I couldn't bring myself to play a full game to accompany this review, which tells its own story! I actually think that the excesses of these rules proved inspiring in the end, partly in ensuring that "old school rules" were still used by those who preferred something simpler,  partly inspiring the first attempts (like Bob Coggins' Napoleon's Battles and Arty Conliffe's Shako) 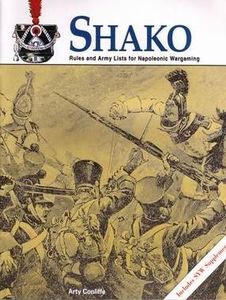 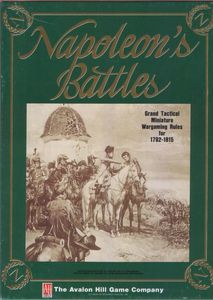 to design elegant games which could actually deal with big battles in a reasonable amount of time.  I think it also kept Peter Gilder's In The Grand Manner 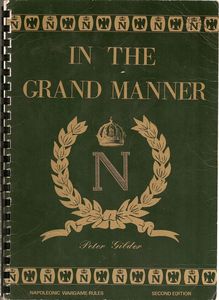 going as a more playable alternative (which directly led to General de Brigade)...

Recommended as an interesting part of wargaming's history, but not otherwise.
Posted by JWH at 13:49