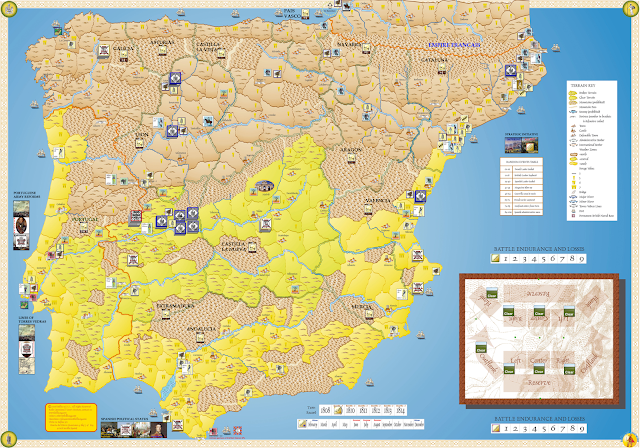 Summary of Events:
Another month without any battles but with significant strategic moves,  Joseph initially moved eastwards towards Madrid hoping to scare off Elio's IV Army or even better, defeat him, before occupying the Madrid area and re-establishing a line of communication to Bayonne running through the passes towards Avila then Burgos and abandoning the Plasencia-Salamanca-Valladolid-Burgos line.  However, Elio withdrew a little and Wellington pursued.  The difficulties of the situation - particularly the devastation around Madrid - re-asserted themselves and Joseph has now committed to trying to force Wellington into retreat, then withdrawing into Leon before re-establishing his logistical network, training and reinforcing before resuming the invasion of southern Spain and Portugal.  Cuesta has brought his Army of the Centre northwards and will soon be able to support Wellington directly.

The key problem for Joseph is that he must keep his remaining troops concentrated to overmatch Wellington, but this robs him of any other offensive capability.  He is therefore instructing Moncey to continue the rebuilding of his III Corps from garrison troops in Northern Spain to provide him with that extra offensive capability.

In the East, the Armies of Valenica and Catalonia, having been reinforced from Andalusia have jointly threatened St-Cyr's positions around Valencia.  He has withdrawn to Castellon anda abandoned, for the time being, any thoughts of blockading Sagunto and Valencia.  St-Cyr is considering withdrawing to Tortosa to aid Junot in the final reduction of those fortresses before beginning a much larger invasion of Valencia.
Soult and Mahy remain watching each other in the passes of Galicia.