In Praise of Heroquest

Over the last few months, I have been re-visiting the old Milton Bradley/Games Workshop game Heroquest. 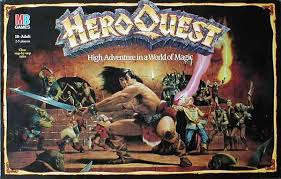 My two eldest children have had a whale of a time playing this game.  The elder (8) took on the roles of Barbarian and Wizard, the younger (6) the roles of Elf and Dwarf.  The good thing about this dungeon quest type game is that the mechanics are simple enough so that young children can grasp them, with a little help; the quests are challenging enough to be interesting but easy enough to be winnable without me (as the "Evil Wizard") deliberately throwing the game.  I think all of the characters except the Elf were killed at some point during the campaign, which was a useful lesson, as it really taught the value of teamwork and protecting the less tough characters!  And the lesson was well learned, I must admit, since the two did apply the lessons rigorously afterwards and they got through the last six quests or so without losing anyone.

All the mechanics are very simple.  Characters can move and do an action per turn (fight or search or cast a spell etc.), or do an action then move.  Combat is resolved by throwing custom D6, which have 3 skulls, 2 "good" shields and 1 "evil" shield; the attacker is after skulls, the defender wants the appropriate shield, so the heroes are no better than the equivalent monsters when attacking, but twice as effective when defending.  The heroes can take a lot more damage than the monsters, but the wizard and elf in particular are quite 'killable' if you can get a few monsters to attack them simultaneously.  There is a degree of risk and reward: the more rooms and corridors which are searched, the more treasures will be found but the more monsters may be activated and the more traps set-off, which can cumulatively weaken the heroes to make them easier meat for the monsters.

During the adventures, certain special and magical items can be found and some can be kept.  Gold can also be looted, or given as payment for successfully completing missions.  This can be spent on new weapons, armour and equipment and so forth, to make the heroes more effective.  We found that missions take between 40 minutes and 75 minutes to complete (or fail).

Magic is really easy: there are 12 spell cards in four sets of three, representing the different elements.  The wizard picks one set of three, the elf picks one and the wizard then gets the remainder.  The spell effects are all explained on the card so the player and evil wizard don't have to remember what each spell does exactly.

The setting is Games Workshop's Warhammer world (or at least, that setting as it was in the late 80s and early 90s).  The four heroes are basically employed by the Empire to battle a range of goblins, orcs, fimir, undead, chaos warriors and sorcerers to rescue prisoners, find items, kill particularly vicious chaos lords and so on.  All the monsters are controlled by "the evil wizard" i.e. the Dungeon Master.  There can therefore be up to five players in a game (one per hero, plus the evil wizard).  A full range of models for the heroes and monsters is included in the game but they can easily be replaced by other models if desired.  We often use female models for the barbarian and the wizard, especially since the Dice Bag Lady has started up her one-stop shop.  Some of them I had before though, I think they might be from Ral Partha.


In addition, there are 3D models of tables, bookcases, treasure chests and torture racks and so on!  They all help to increase the immersion and the interest for the younger gamers!

My children have asked for more but I am not sure how to proceed.  The expansion sets for Heroquest seem quite expensive, more collectors' prices than gamers' prices perhaps.  I remember that Advanced Heroquest was a distinct step-up in complexity, so I'd be interested in any recommendations for dungeoncrawl games pitched at the same easy, intuitive level.  Anyway, highly recommended as an introductory game for children and novices.
Posted by JWH at 20:46