Further Thoughts on Simplicity in Practice: Encounter at Plattdorf

In a recent post, I discussed Neil Thomas' Simplicity in Practice rules which were discussed in Battlegames 23.  Although I think these rules are a lot of fun and basically sound, I think that the close combat factors in it are very poorly calibrated, making "local superiority" as important as being "charged in the flank", for instance.  So I decided to modify these rules as follows:

"Each side rolls 3 additional dice for each of the following conditions that apply":
Attacking enemy flank or rear

"Each side rolls 2 additional dice for each of the following conditions that apply":
Defenders with terrain advantage (depending on strength of terrain)
Fewer DP than enemy unit
COI defending against COI with same number of DP
COI attacked frontally by HC, DG or LC
COI, HC, DG or LI attacking LI in open terrain
HC fighting DG or LC
DG fighting LC

"Each side rolls an additional die for each of the following conditions that apply":
More friendly than enemy units within 10 cm of melee
Defenders with terrain advantage (depending on strength of terrain)

I feel confident that this very minor rules change will take away unrealistic advantages to simply massing units and give a realistically better bonus to those units that manage to find a flank (which will pretty much give a certain victory unless the outflanked unit has some serious mitigating advantages).  To test out these changes, I had a go at the Henry Hyde-penned Don Featherstone tribute scenario "The Encounter at Plattdorf" from Miniature Wargames 366. 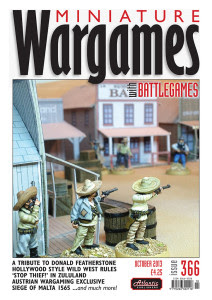 I won't give all the details of the scenario but the forces involved were:

The French were trying to take and hold the town of Plattdorf and the Grungrat ridge whilst the Austrians were trying to stop them as well as hold the bridge and the line of the Stierbach.


Game Notes: A really fun game, with the Austrians turning out triumphant.  Having more of their forces arrive just a little earlier helped, as did the decision to boldly advance with the light infantry and cavalry.  I felt that the rule changes, deliberately kept to a minimum, did provide a better game by increasing the importance of tactics and decreasing the ability of "mass" to overcome this.  I am going to incorporate this as standard in future games.  I still think the mechanism might be refined a little further, but that will require more thought.
These rules, yet again, provided a very simple and easy game.  Although I often disagree with Neil Thomas' calibration of tactical effects, I love the simplicity of his designs.  They give good wargames without ever causing the "so what do we do now" moments of headache.   The scenario is a cracker too - simple but challenging - and I can definitely see myself having another go at this one soon.
One thing I would really like to is incorporate some features to make the rules a little more Napoleonic in feel.  Squares are the obvious answer, but I don't want to mess about with rebasing or, ideally markers.  I was thinking more of the way that he incorporates March Column: just include the effects without mucking about with showing the change of formation.  So I need to sit down and think about how to do this...