The Battle of Mons Graupius: A Polemos SPQR re-fight

Background:
The battle of Mons Graupius took place around AD83 in Scotland between the Caledonians and the Imperial Romans: further details here.  This battle is one of the scenarios in the back of the Polemos SPQR rulebook and I have Late Republican Roman and British armies which I thought would be close enough, so I chose this battle for a rules comparison test, the idea being to re-fight the battle three times with three different rulesets. So, the first game using the Polemos SPQR ruleset itself. 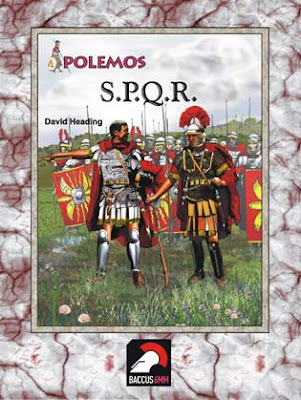 The scenario gives the following forces:


Game Notes:
I'll cover the comparative aspects of the game later but in its own right it was a good game, relatively brief.  Manoeuvre is very hard in this game, it is more about timing and exercising (very limited!) control.  I set up the Caledonians according to the scenario map in the Polemos SPQR rulebook, but I would never use this deployment in a game with free set-up.  The Caledonians need to be in bigger, solid blocks especially their infantry.  The tempo point costs are just too great for the general to cope with using various lines like the Romans can.

Figures are from Baccus 6mm.  As mentioned at the top, the rules used were Polemos SPQR, there are some reviews here from:
Meeples & Miniatures
Wargaming for Grown Ups
Me
Posted by JWH at 08:24