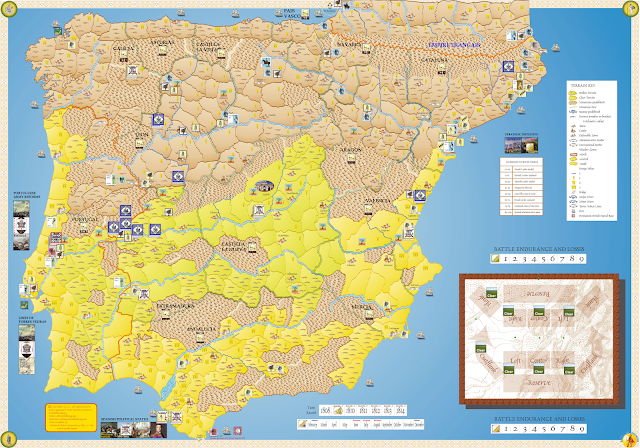 There were no battles this month, the major offensive movement was turned back by logistical difficulties and a poor strategic situation alone.

Portugal:
King Joseph, after gathering all his additional forces (essentially the divisions directly subordinate to the Army of Spain) and re-organizing his battered Corps, launched another invasion of Portugal along the route to the North of the Tagus.  However, Wellington this time withdrew slightly to Santarem, leaving only a small British garrison in the castle of Abrantes.  Joseph calculated that his supply line through this devastated region and the time taken to subdue this garrison would cost him more time and casualties than he could afford and quickly withdrew to his start positions around Coria.

Leon:
Soult remained in the area around Zamora, in order to cover Astorga against any advance from Mahy and to provide succour to the Army of Spain if it should be forced to retreat from Portugal.  Moncey's III Corps, stripped of most of its troops and guns, has been sent North to replenish its strength from the garrisons in Leon and Castile.  Only a token remnant remains of the old III Corps which has marched the length and breadth of Spain in the last 10 months!

Castile and Andalusia:
Elio's IV Army has advanced North and is now at Toledo, firmly establishing control of the Madrid area and threatening both Joseph's rear and the entire French line of communication back to France.   Castanos' Army of Andalusia and Sarsfield's Army of Catalonia are still re-fitting in the area.

Valencia:
St-Cyr's VII Corps has continued to advance southwards, reaching Castellon and establishing a logistic base there.  Cervellon's Army of Valencia, reinforced with troops from the Cadiz garrison, has been returned to Valencia and has established strong garrisons in that city and in the fortress of Sagunto.

Aragon and Catalonia:
Junot has received a welcome reinforcement of German infantry to bolster his forces, whilst his infantry divsions maintain their blockades of Hostalrich, Tarragona and Tortosa.  Junot intends to establish a stronger supply network in order to carry out regular sieges and secure the area more quickly: Tarragona in particular may hold out a long time against a mere blockade.

Outlook:
King Joseph is on the horns of a real dilemma.  It will be a difficult to invade Portugal and defeat Wellington because the area between Coria and Lisbon is so denuded of supplies.  At the same time, his rear and his communications with France are being threatened by the advance of the 25,000 men of Elio's IV Army.  However, if he detaches sufficient troops to deal with this threat, he will probably be attacked and defeated by Wellington's Anglo-Portuguese army.  It may be that a withdrawal towards Salamanca is his only option in the short-term, in order to combine with Soult's II Corps  and re-establish a firmer logistical footing.
Posted by JWH at 08:14