Five Leagues from the Borderlands: A Camp Raid AAR.

Five Leagues From the Borderlands: 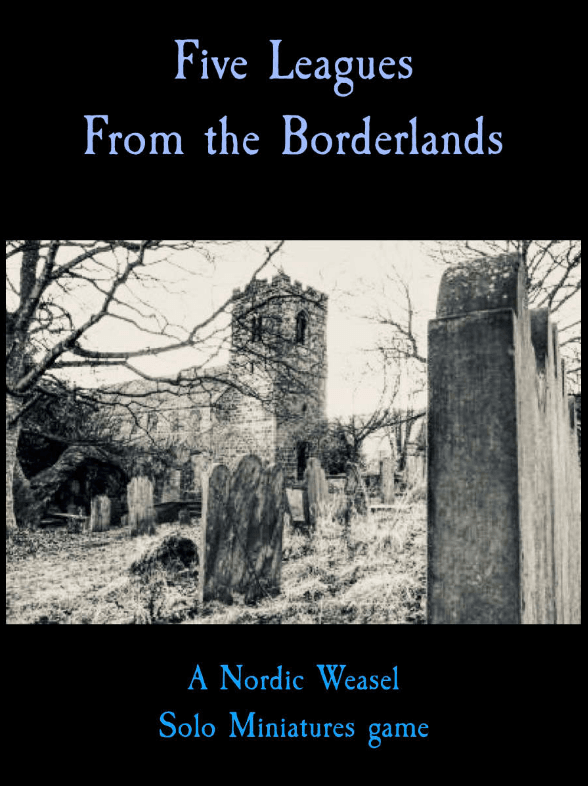 For the first time, I have managed to get Five Leagues From the Borderlands out for a full dress game.  I have played a few games with these rules before, but they have been counters on paper just to get some familiarity with the basic rules concepts.

I suppose that 5 Leagues is what some gamers call an "RPG-lite" game, a term I have never particularly liked but it will have to do.  It stresses the combat elements of a 'traditional' RPG but simplifies and abstracts them, whilst making the RPG campaigning and social interaction elements much more simplified and much more abstract.  But more of this later!

Anyway, generating a band of 4 Heroes and Heroines and 4 Followers, and following the capamign turn sequence, I generated an encounter in which the party has tracked a bunch of marauding barbarians to their lair.  I was thinking very much of a Lord of the Rings or Warhammer-type game, so the barbarians here are Orcs who are raiding Eriador and the party is trying to surprise and kill them.

Game Results: I think three of the Orcs escaped and six were killed or otherwise incapacitated.  Neither the fallen hero or follower actually died, but both were injured badly enough as to be out of the campaign for a few days.  A decent haul of loot was found by the party - swag recovered from the Orc raiders.

Game Notes: The rules were very intuitive and quick to pick up, including the quasi-AI for controlling the actions of the enemy fighters.  It is quite a balanced fight, my brief descriptions above don't emphasize that the party was quite lucky to get away with that attack once it had been spotted by the sentry, since the average barbarian (here Orc) is about as tough or a little more than the average starting hero and definitely tougher than the average follower.  The movement, initiative and combat mechanics are all quite familiar, but work fine.  The initiative system involves rolling dice equal to the number of party members, with low rolls (usually 1, but sometimes 2 or 3) being best as they can be assigned to characters to move before the opposition, with everyone else moving afterwards.  So the key thing appears to be to get the key heroes to do key stuff before the opposition gets a chance to react, and then have the others react to the opposition moves.  The combat mechanics don't make local numerical superiority that important compared to combat skill and trying to get advantageous match-ups.  Positioning seems to be mainly important as a mechanism to achieve the latter, by forcing the opposition to attack uphill, across walls or concentrate on the party's strongest heroes etc.  I will resist too much comment though at this point until I get a better mastery of the system.

The campaign procedural game (or the pre- and post-battle phases in more wargamer-y speak) seemed to work pretty well too, both in terms of having workable abstract mechanics to deal with the kind of stuff that a party may want to do (buy stuff, meet people, scout out areas, gamble, heal etc.).  It seems calibrated quite well to be challenging at the start but very importantly to remain so - the rewards for success are definite, but not so great as to really unbalance the game.

So overall I am impressed, the game was fun and I am looking forward to playing some more.  What I do need to do is make more 28mm suitable terrain, since I don't have that much really.  If I had only know, I would have collected in 15mm probably, but since I already have quite a few 28mm figures accumulated over the years, it feels like more trouble than its worth to change game size now.

The game was played on a 3'x2' board, which was fine (normal movement is 4-6") although 3'x3' might be a trifle better.  Figures are a mixture of Bad Squiddo, Gripping Beast, Perry Miniatures, a free Partizan figure (I think!) and Heroquest stuff...