The Battle of Killiecrankie - A Savage Way of Fighting Battle Report

The Battle of Killiecrankie was the major battle of the 1689 Jacobite Uprising in Scotland, with a Jacobite Highlander force under James Graham, Viscount Dundee ambushing a Scottish government column under McKay.  From a tactical point of view, it is thought to be the first use of the plug bayonet by the government infantry, thus eliminating the need for pikemen.

Andy Callan's rules and article on the Jacobite rebellions in Wargames Illustrated 003 features a skeleton description of the battle, which I supplemented with information from Wikipedia and from the Battlefields of Britain website.  I revisited these rules in September 2019 when I re-fought Culloden. 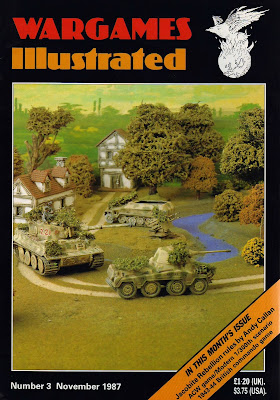 The government forces outnumbered their Jacobite opponents and I settled on the following orders of battle for each side:

The numbers in brackets represent a more accurate division of the units to represent the forces on the day but because I use fixed unit bases, it makes more sense for me to use standard sized units.  That said, if I ever re-fight this again using these rules, I might keep the Government Army the same but use the smaller unit sizes for the Jacobites.
Although the Government Army did contain experienced troops, there is an argument for making all the Government troops 'Raw'.  I try not to be too influenced by what happened on the day however (since that creates a self-reinforcing effect) and I went with 'Experienced' for the regiments from the Scots' Brigade.
The Government's artillery was useless after a few rounds (broken/rotten carriages).  I simulated this by giving the gun battery a maximum of nine shots.
Although I was using stepped hills for this quick set-up game, the terrain is to be understood as a clear slope down towards the government lines, so the Jacobites count as 'uphill' until contact is made.

The rules themselves...all the individual mechanisms are basically fine.  Working casualties out as percentages isn't amazingly immersive as a game experience but it isn't exactly difficult.  The morale/reaction rules are quite well-calibrated I thought, as was the musketry and melee (generally).  Where the whole thing really struggles is in game structure.  I don't think I could tell you whether the game is meant to be by alternative or simultaneous movement.  The 'charge' routine is good as an individual mechanism, with its tests for whether the Government Foot will open fire too early or not, and whether the Highlanders will stop to fire some quick disruptive shot; but it is very  unclear how this interacts with other units not being charge being fired for instance.  And in some cases the wording of the mechanism is unclear, for quite important stuff: how many times the Government Foot can fire when being attacked for instance (it could be anything between 1 and 3 times, with variations in effect between 1% and 15% per volley, so it really makes a difference).

I have mentioned before in the Comments on a similar subject that Andy Callan writes that he wrote these rules because:

3 - He wanted to re-fight a solitaire map campaign with strengths expressed in individual soldiers, so he was committed to recording individual casualties.

Within those parameters, there is a set of useful ideas in there, but it needs some structural work I think to make it into a better functioning game.  But it is very worth having a look through/play through and seeing if it could be used or adapted by a player of this period.

And, because "why not?", here is The Braes O'Killiecrankie

Figures by Baccus 6mm, I think the house is by Leven, the buildings in Killiecrankie by Timecast.