Since it has been a while since I managed to get a figure game to the table, and with some unexpected free(-ish!) time on my hands, and having that "I really, really, really, really, want to get my toys out and have a game" sort of feeling, I thought that something small, simple and speedy would be the way to go, so I decided to have another go at Prestonpans, with the 'Simple 45' rules from Wargames Illustrated 134, since rules don't really get shorter, simpler or speedier than these!  It would also enable me to get my new British WSS infantry onto the table. 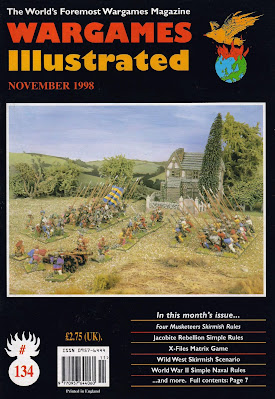 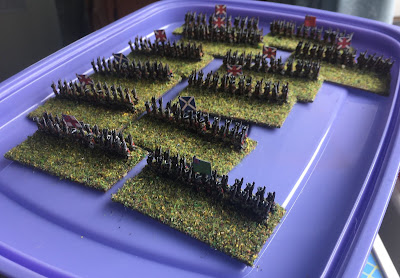 As a reminder, the Battle of Prestonpans was the main opening engagement of the 1745 Jacobite rebellion, in which the (fierce) Jacobite Army made short work of a (very green) Government Army.

The armies numbered about 2000 troops apiece, which was translated as 5 units per side for the scenario.  The government army has 3 poor-quality infantry units and 2 poor-quality cavalry units, the Jacobites have 5 'standard' units of highlanders.

Game Notes: An unexpectedly close game as the Government Army performed much better than it did in real life, where it was swept away in 20 minutes without doing much damage to the Jacobites at all.  Although the Jacobite Army prevailed in this refight, I imagine that such heavy losses would have stopped the 1745 rebellion in its tracks and prevented any invasion of England, leading to a very different course of events.

I won't repeat the remarks I made in the first re-fight of this scenario but will make a separate one: Cavalry is much less useful in this game than in almost any other, since they don't get to instantly break opposing units after a successful charge.  Both Government Dragoon units in this game did manage to charge home and did manage to inflict significant damage on the Highland Foot.  But because no unit can quick kill an average enemy unit in this game, and Highlanders are more effective in melee than their opponents, in both cases the Highlanders stayed fighting and eventually got the Government Dragoons to rout.  I don't think this would happen if re-fighting this with WRG 1685-1845, for example, although to be fair this kind of thing could happen in Andy Callan's 'Savage Way of Fighting' rules for the Jacobite Wars in WI003.  This seems to be a key "period flavour" trait - cavalry were just not that effective against Jacobite armies, even though it seems that they 'should' have been.

This game did expose some of the gaps in the published rules, which are under-defined.  Do units turn by wheeling for instance?  Can they about face?  Does front-corner to front-corner contact suffice to count an additional unit in melee?  And so on.  With so few units and such a small game - and perhaps most importantly, a solitaire game - it was naturally very easy to have ad hoc answers to these questions but I don't think that is ever ideal.

These thoughts did lead to one other, bigger, thought: is it possible to design sets of meta-rules which would force a subsequent designer using the model to write rules to cover all the things which are going to come up?  For example, every game which uses one base = one unit is going to have to deal with certain interactions to do with movement, terrain, support and so on.  It isn't as if the number of wargame rules that have been written is small, after all, and the number of FAQs, clarifications, errata etc. is pretty large too.  Conversely, figures using individually based figures have their own sets of issues, as do figures which use individual vehicles but bases of a squad or section and so on.

Anyway, very nice to be back figure gaming, more soon!

Figures by Baccus 6mm, with the Government infantry from the WSS range, the dragoons from the Napoleonic range and the Highlanders from the C17 range.