Manchester and Norfolk sent messages stressing their continued support for the cause of Parliament against privilege and popery.

Waller took Winchester and then moved to Salisbury to reinforce Bedford against Hopton.  Hopton, in his turn, turned back and began to besiege Lyme.  Newcastle moved his raw Northern army to Hexham, to threaten the Fairfaxes in Carlisle.  The Fairfaxes, leaving a garrison in Carlisle, moved southwards and took Appleby.   Foppington, fresh from his capture of Oxford, moved to Gloucester to begin besieging that place.  Prince Maurice moved fresh levies from Shropshire and Wales to support the King in Worcester, where the King, Prince Rupert and Astley were hastily training their troops - as were Essex and Skippon - but Byron was sent to Basing to try and revive the Royalist cause in the South after the recent set-backs.  Ballard moved from London to begin besieging Reading.  Derby took Blackburn.    Meldrum moved from Grantham to King's Lynn to begin recruiting.  Vasey left the King's army to go to Newark for the same purpose. 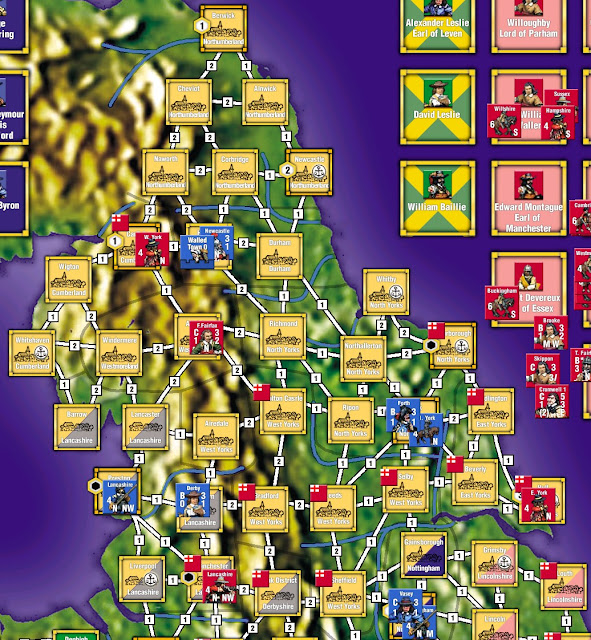 Parliamentarians:
Foppington at Gloucester with 4000
Essex at Warwick with 12000
Meldrum at King's Lynn with 3000
3000 besieging Reading (Ballard being replaced)
4000 at London

Parliamentarians:
Bedford with 6000 at Salisbury

Notes: The quick reinforcement of the King has stabilized the situation in the main theatre of war but Foppington and Ballad have begun the reduction of further Royalist strongholds.  Things are beginning to warm up in the North too, as Newcastle has begun to fence with the Fairfaxes.  So far however, both parties are more inclined to threaten than risk all on a general action.

It appears to me that the Royalists are still looking quite strong, especially in the South and South Midlands and they may be inclined to resume offensive operations soon.