Several new leaders became active at the beginning of December 1642.  For the Parliamentarians, Brereton became active in Manchester, Groby in Market Harborough, Massey in Bristol, Wark in King's Lynn and Willoughby in Colchester.  Ruthin took over the small army besieging Reading from Ballard.  On the King's side, Cavendish became active in Newcastle.

Sherborne assured the King of its continued loyalty.  More importantly however, the King's party in Oxford sent secret messages letting it be known that the city was ripe for revolt against the hated Roundheads for their "many and several outrages".  This intelligence had a profound effect on the King's thinking, for instead of relieving Gloucester, he resolved to risk a quick return to Oxford, hoping to effect a quick re-capture and change the strategic balance to one of equilibrium.  Choosing a slightly circuitous route so as to always be protected by the Avon, the King moved via Birmigham and Coventry to Banbury.  At this point, Essex marched from his central position around Warwick to intercept the King's march between Coventry and Banbury.  However, finding the King in a strong position, behind a swollen stream with much of the ground turned into a quagmire, Essex declined to attack and left Oxford to its fate, returning to his base at Warwick, concentrating upon more training of his troops.  The King reached the latter place, but unfortunately for him, the plot to revolt and open the gates was discovered and crushed before the King could enter the city.  He thus began a regular siege of the place.

The Earl of Bedford moved his army to Dorchester to threaten Hopton, who had begun to besiege Lyme.  That latter general however removed to Bodmin.  Waller moved to Plymouth to take control of that city and begin recruiting.

The Marquis of Newcastle concentrated upon training his raw troopers. The Fairfaxes moved towards Richmond.  The Marquis attempted to intercept this movement, but the Fairfaxes eluded his reconnaissances and reached and took Richmond.

Hampden moved to London to take over the garrison there.  Byron moved to Guildford.  Vasey moved to Shrewsbury, that being a more promising recruiting ground at present than the East Midlands.  Wark moved into The Fens. 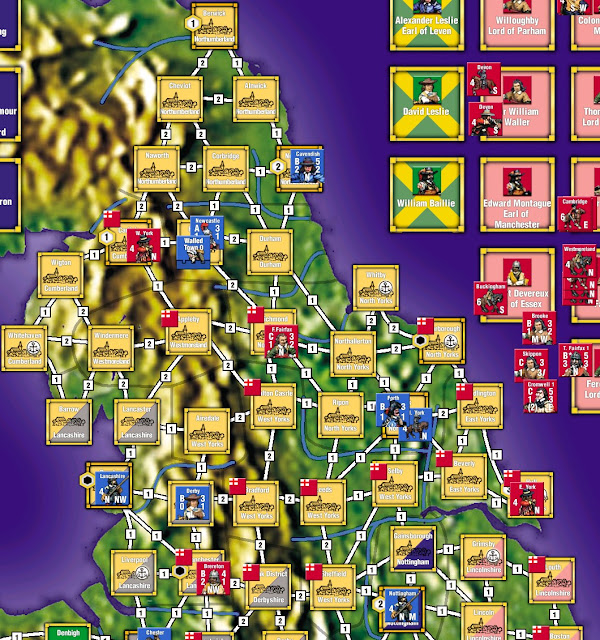 The Parliamentarians:
Waller at Plymouth with c.2000
Bedford at Dorchester with c.7000
Ruthin with c.3000 at Reading
Hampden at London with c.4000

Game Notes:
A mixed bag this time around.  The Royalists overall look quite strong and the King is in a good position, despite having failed to seize Oxford by a coup de main.  Essex must move next turn to protect London and Oxford.  That said, the early fall of Reading and the re-capture of Gloucester are probably permanent gains to the Parliamentary cause and Bristol looks less vulnerable.

In the South and South-West, both sides have been recruiting heavily before launching major offensives in the New Year.  Hopton's force looks formidable, but can he afford to leave Plymouth free in his rear or must he take that first - a very difficult proposition?  Hampden and Ruthin could probably squash Byron, but with the King around Oxford, they probably do not dare to leave London unguarded.

In the North, the Marquis of Newcastle is strong enough to attack, but should he attack the Fairfaxes or Carlisle first?  And should Brereton try and regain the majority of Lancashire for Parliament or strike southwards instead?
Posted by JWH at 04:27